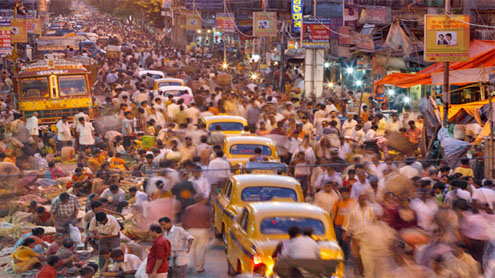 UNITED NATIONS: With A few days before the world’s population tops the 7-billion mark, a new U.N.

report has called for planning and investment in development strategies that were sustainable and geared to providing opportunities for all in a world that was rapidly becoming more complex, mobile and urban. The report, entitled ‘People and Possibilities in a World of 7 Billion’, is the flagship publication of the United Nations Population Fund (UNFPA).It comes nearly 20 years after the landmark 1994 International Conference on Population and Development, and provides a snapshot of a world where, on average, people are now living 20 years longer; more children are living into adulthood; and societies are becoming more interdependent, even as they grey and migrate to cities.

The world must seize the opportunity to invest in the health and education of its youth to reap the full benefits of future economic development or else face a continuation of the sorry state of disparities in which hundreds of millions of people in developing nations lack the most basic ingredients for a decent life, UN Population Fund (UNFPA) Executive Director Babatunde Osotimehin said in the foreword of the study.

With planning and the right investments in people now, to empower them to make choices that are not only good for themselves, but also for our global commons, our world of 7 billion can have thriving sustainable cities,productive labour forces that fuel economies, and youth populations that contribute to the well-being of their societies, he wrote.

The report notes that the record population size can be viewed in many ways as a success for humanity because it means people are living longer and more children are surviving worldwide. But not everyone has benefited from this achievement or the higher quality of life that this implies.

Great disparities exist among and within countries and in rights and opportunities between men and women, girls and boys, as evidenced by the fact that that 215 million women of child-bearing age in developing countries lack access to voluntary family planning, while millions of adolescent girls and boys there have little access to sex education and information on how to prevent pregnancies or protect themselves from HIV.

“Our work is far from done,” Osotimehin said, noting that charting a path now to development that promotes equality rather than exacerbating or reinforcing inequalities is more important than ever.“We must tear down economic, legal and social barriers, to put women and men and boys and girls on an equal footing in all spheres of life.” Of the world’s 7 billion, 1.8 billion are young people between the ages of 10 and 24, he noted. Young people hold the key to the future, with the potential to transform the global political landscape and to propel economies through their creativity and capacities for innovation.

“But the opportunity to realize youth’s great potential must be seized now. We should be investing in the health and education of our youth. This would yield enormous returns in economic growth and development for generations to come. One of the report’s authors, Barbara Crossette, who carried out field reporting from the slums of India to the barren steppes of Ethiopia, discounted the birth of the world’s 7 billionth inhabitant as symbolic”.

The figure of 7 billion is really irrelevant to many people, and most of all to women in the developing world where seven pregnancies is a much more significant number. They [women] have really been let down in many ways by the world, she told a news conference in New York, stressing that some governments are not supporting family planning and other efforts. – APP