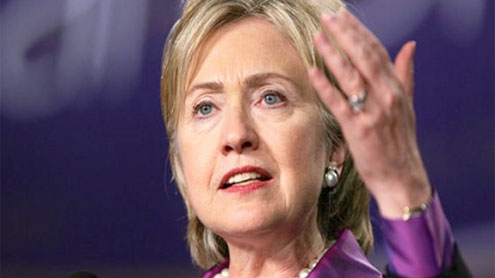 WASHINGTON: The Obama administration is setting up an Internet-based embassy to appeal to Iranians hoping to broaden their understanding of the United States, while at the same time studying new sanctions to raise the pressure on Iran’s government over its disputed nuclear program and alleged ties to terrorism.

Secretary of State Hillary Rodham Clinton said in interviews Wednesday with Persian-language media that the U.S. wanted to affirm its friendship to the Iranian people even at a time of rising tensions with the government in Tehran. As part of that effort, she said a “virtual embassy in Tehran” will be online by the end of the year, helping Iranians wishing to travel or study in the United States.

“We’re trying to reach out to the Iranian people,” Clinton said. “We’ve tried to reach out to the government, just not very successfully.”linton stressed that the U.S. was committed to its two-track approach of engagement and sanctions toward the Iranian government. But she said the outreach was being directed to ordinary Iranians who have suffered as a result of their government’s “reckless” conduct regarding its uranium enrichment activities, fomenting of unrest in neighboring countries and its role in the alleged terror plot to assassinate Saudi Arabia’s ambassador in Washington.

The U.S. has had no embassy in Iran since breaking off diplomatic relations shortly after the 1979 Islamic Revolution. Iran, likewise, has no embassy in Washington, but Clinton said President Barack Obama has tried to entreat Tehran into negotiations.

Separately Wednesday, Republican Rep. Peter King said the U.S. should kick out Iranian officials at the United Nations in New York and in Washington because many of them are spies. King said the move would be an appropriate response to an alleged plot against the Saudi ambassador, but the State Department rejected the suggestion.

Clinton, who celebrated her 64th birthday Wednesday, spoke with the BBC and “Parazit,” a Persian-language program run by Voice of America that follows the news satire format popularized in the U.S. by the “Daily Show.” Yet she spoke seriously about her fears that Iran was becoming a more entrenched “military dictatorship,” threatening countries in its region and beyond.

On Iran’s uranium enrichment activities, Clinton said, “Everyone believes that the covert actions, the covert facilities, the misleading information is part of an attempt by the regime to acquire nuclear weapons.” Iran says the program is solely for producing energy, but she claimed the evidence suggests otherwise.

The U.S. already has a series of sanctions against the Iranian economy, but Clinton said new measures were being examined to pressure the government into being a better global citizen. Iran’s central bank and the economic activities of the hard-line Revolutionary Guard Corps and Quds Force are possible targets, she suggested.

Clinton also spoke of Iran’s efforts to jam Internet sites and track dissident activity on the Internet, part of a policy that she deemed an “electronic curtain.” She said Iran’s was the most effective government in the world in disrupting Internet and telephone communication.

“It’s the 21st century equivalent of the barbed wire and the fences and the dogs that the old Soviet Union used, because they come at it from the same mentality,” Clinton said. “They want totalitarian control over what you learn and what you say and even what you think and how you worship and all the things that go to the heart of human dignity and human freedom.”

The U.S. is continuing work on creating new technologies to help dissidents and regime opponents circumvent censorship and monitoring, Clinton said. She called it one of her highest priorities.

Yet she also expressed some regret for the U.S. government’s tepid support for the opposition Green Movement after Iran’s disputed 2009 presidential election. Unlike in Libya, where the U.S. and other countries intervened to protect people protesting Moammar Gadhafi’s dictatorship, Clinton noted that the Iranian demonstrators insisted that they wanted no U.S. help.

“We were torn,” she said. “It was a very tough time for us because we wanted to be full-hearted in favor of what was going on inside Iran and we kept being cautioned that we would put people’s lives in danger, we would discredit the movement, we would undermine their aspirations.

“I think if something were to happen again, it would be smart for the Green Movement, or some other movement inside Iran, to say we want the voices of the world, we want the support of the world behind us. – Yahoonews