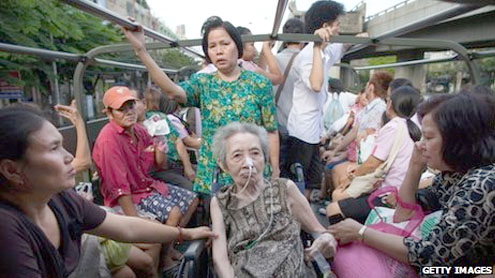 Thousands of residents are rushing to leave the Thai capital Bangkok, which is braced for potentially severe flooding over the weekend.

The city’s bus and train stations and many roads are jammed by crowds of people attempting to flee.People in several northern districts of the capital – some of which are now 90% submerged by rising water – have been told they should evacuate immediately.More than 360 people have died in Thailand’s worst flooding in decades.The crisis is an early test for Prime Minister Yingluck Shinawatra, who took office in August and has previously been criticised for failing to take the flood threat seriously enough.

“It’s a crisis, because if we try to resist this massive amount of floodwater, a force of nature, we won’t win,” Ms Yingluck said.”But if we allow it to flow freely then people in many areas are prepared.”Any lingering sense of complacency has long gone, says the BBC’s Rachel Harvey in Bangkok.
Over the weekend the influx of run-off water from Thailand’s inundated central plains is expected to combine with seasonal high tides to flood more parts of the capital.

Thai authorities have declared a five-day holiday, to run from Thursday through to Monday, in Bangkok and in 20 provinces affected by the flooding to allow residents to relocate. Bangkok’s Governor Sukhumbhand Paribatra issued an evacuation alert for residents of Don Muang, Bang Phlad and Thawi Wattana districts in the north of the capital.

“This is the first time I am using the term ‘evacuation’, the first time I’m really asking you to leave,” Mr Sukhumbhand said.The city’s Mo Chit bus terminal has already seen huge crowds of people, some of whom had to wait for hours to get a bus to leave the city.Many residents were reportedly heading for southern and eastern coastal resorts that have escaped the flooding.Flights out of the international airport, Suvarnabhumi, were operating as normal but were said to be packed.At Bangkok’s domestic airport, Don Muang, people living in an evacuation shelter are now being moved again. The airport itself is closed because the runway is flooded.

But the government’s flood relief operation centre, which is based on the second floor of the airport, insists it will not relocate.In the city of nine million, there were reports that some shops were rationing stocks of staples including rice and eggs amid stockpiling by anxious residents.Supplies of bottled water were said to be running low in many areas.

Residents were protecting their homes and businesses with sandbags – with some even erecting sealed cement barriers across shop fronts, reported the Associated Press news agency.Britain’s Foreign Office on Wednesday warned against all but essential travel to Bangkok.Ms Yingluck has warned that flood waters could linger in the capital for between two weeks and a month.The flooding has been triggered by unusually heavy seasonal rains across the country since July. About one third of all provinces remain affected by flooding. – BBC