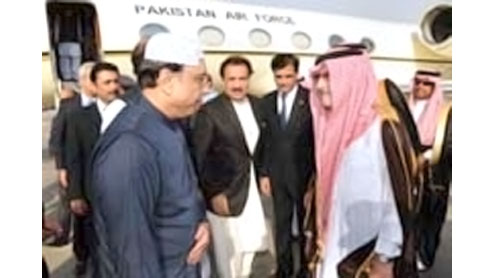 Governor Riyadh Prince Salman Bin Abdul Aziz, Deputy Defence Minister of Saudi Arabia Prince Khalid Bin Sultan and other Royal family members were also present on the occasion. PML-Q Chief Ch. Shujaat Hussain, Interior Minister Rehman Malik and Chief of the Army Staff Gen Ashfaq Parvez Kayani also accompanied President Zardari, who specially flew to the Saudi capital to offer condolences to the people and leadership of Saudi Arabia on his as well as on behalf of the people of Pakistan.

The President on this occasion said that with the death of Crown Prince Sultan Bin Abdul Aziz Al Saud, the Kingdom and the world has lost a leader, who worked tirelessly for humanity and social causes.The President said, the late Crown Prince, who was widely respected in Pakistan for his charity, had special feelings for the people of Pakistan and always played an effective role in strengthening the relations between the two brotherly nations.

Late Saudi Crown Prince Sultan Bin Abdul Aziz Al Saud, who remained the Defence Minister of Saudi Arabia for the last 40 years, died on Saturday last and was laid to rest on Tuesday.President Zardari’s visit to Saudi Arabia to offer condolences to the Saudi people and leadership, despite the demise of Begum Nusrat Bhutto, reflected the very close, deep-rooted and historic ties that existed between Pakistan and Saudi Arabia.  – APP