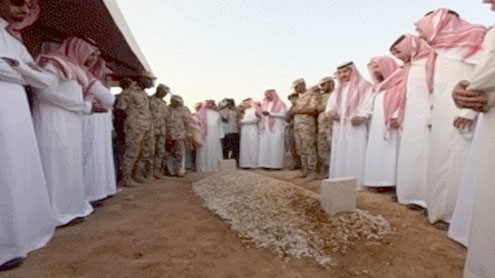 RIYADH: World leaders poured into Riyadh to offer condolences on the death of Saudi Crown Prince Sultan bin Abdulaziz who was buried on Tuesday in the presence of the Custodian of the Two Holy Mosques, King Abdullah bin Abdulaziz of Saudi Arabia.

The funeral set the stage for King Abdullah to name a new crown prince, widely expected to be Interior Minister Prince Nayef bin Abdulaziz, a choice that would emphasise stability in the kingdom.His Highness Shaikh Mohammed bin Rashid Al Maktoum, Vice-President and Prime Minister of the UAE and Ruler of Dubai, offered his condolences here to Prince Nayef and a number of the Saudi ruling family members.

The body of Prince Sultan, who died of colon cancer in New York on Saturday, was flown back to Riyadh on Monday, accompanied by his younger brother and Riyadh Governor Prince Salman, who may now play a more prominent role in the kingdom.Among the mourners who greeted King Abdullah after the prayer recital was Iran’s Foreign Minister Ali Akbar Salehi. The Royal Court said it would be open to accept condolences for three days from Tuesday.

A US delegation headed by Vice-President Joe Biden is expected in Riyadh on Thursday.The death of Prince Sultan, who was also defence minister, might also lead to a wider cabinet reshuffle. Prince Nayef is sometimes described by Saudi liberals as an anti-reform conservative, who is likely to take a cautious approach to social and political change, while viewing foreign policy through the lens of national security.

However, former diplomats to Riyadh and some analysts say the man who has served as interior minister since 1975 may show a more pragmatic side as crown prince.“Nayef had some time with Sultan’s long illness to run himself in as crown prince and he has acted on behalf of the king,” said one former diplomat.

“He has become acquainted with authority across the board.”King Abdullah, who left hospital on Saturday night after a back operation last week, remained seated for the funeral prayers and wore a surgical mask over his face. Guests at the funeral service, including the president of Afghanistan, the Syrian vice-president and the head of Egypt’s ruling military council, paid condolences to King Abdullah as they filed out of the prayer hall.

The seniority of the delegations demonstrates Sultan’s prominent role as defence minister over five decades when he used multi-billion-dollar arms purchases to strengthen Saudi armed forces and cement ties with Western allies.King Abdullah must also name a new defence minister. One possible candidate is Prince Khaled bin Sultan, a son of the late crown prince who headed Saudi forces during the 1991 Gulf War and has been a deputy defence minister for 10 years.The job could also go to Riyadh Governor Prince Salman, seen as the next most senior royal after the king and Prince Nayef. – Khaleejnews