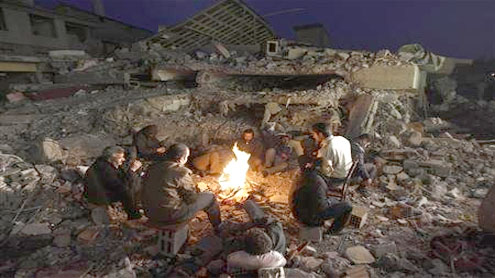 Turkey: Rescue workers dug deeper into collapsed buildings on Tuesday in a battle against time to find survivors from an earthquake in southeast Turkey that killed hundreds and made tens of thousands homeless.

Rescuers pulled more dead bodies from under the rubble of dozens of collapsed homes overnight while people slept around small fires in towns rattled by aftershocks across Van province, near the Iranian border.”Life has become hell. We are outside, the weather is cold. There are no tents,” said Emin Kayram, 53, sitting by a small fire in the town of Ercis after spending the night with his family of eight in a van parked nearby.His nephew was trapped in the rubble of a building behind him, where rescue workers have been digging through the night.

“He is 18, a student. He is still stuck in there. This is the third day but you can’t lose hope. We have to wait here,” he said.Crowds formed at one demolished building where bystanders said a trapped boy had made contact by mobile phone.As a rescue team dug at the rubble, one man screamed at the workers: “Where were you last night? I told you last night there were people here.

“The death toll from Sunday’s quake stood at 279 and hundreds more were missing. Casualties were concentrated so far in Ercis and the provincial capital Van, with officials checking outlying areas.A worker from one rescue team told Reuters they had pulled four dead people out of a building overnight. Another body wrapped in a yellow bag was pulled out in the morning.

“It was like the judgment day,” said Mesut Ozan Yilmaz, 18, who survived for 32 hours under the rubble of a tea house where he had been passing time with friends.Unhurt but lying on a hospital bed under a thick blanket, his face blackened by dust and dirt, Yilmaz gave a chilling account to CNN Turk of how he survived by diving under a table.”The space we had was so narrow.

People were fighting for more space to survive,” Yilmaz said. “I rested my head on a dead man’s foot. I know I would be dead now if I had let myself go psychologically.”As grieving families prepared to bury their dead, others kept vigil by the mounds of concrete rubble and masonry, praying rescue teams would find missing loved ones alive.

The Disaster and Emergency Administration said 1,301 people had been injured and 2,262 buildings had collapsed.Rescue teams concentrated efforts in Ercis, a town of 100,000 that was worst hit by the 7.2 magnitude tremor.Residents spent the night outside as they were scared to return to homes which suffered damage in the quake.”We are afraid. Tremors are happening all the time.

Pieces of concrete are falling down off the buildings,” said Farzande Dilmac, 70, pointing to an empty block of flats riven by large cracks.”Our people are in a bad state, what can we do?” he said as a group of around 20 women, their heads wrapped in colored headscarves, begin wailing.

The Turkish Red Crescent distributed up to 13,000 tents, and was preparing to provide temporary shelter for about 40,000 people, although there were no reliable estimates of the number of people left destitute.The relief agency was criticized for failing to ensure that some of the most needy, particularly in villages, received tents as temperatures plummeted overnight.”We were sent 25 tents for 150 homes. Everybody is waiting outside, we’ve got small children, we’ve got nothing left,” saidAhmet Arikes, the 60-year-old headman of Amik, a village outside Van that was reduced to rubble.

Television images showed desperate men pushing each other roughly to grab tents from the back of a Red Crescent truck.”I didn’t think the Red Crescent was successful enough in giving away tents. There is a problem on that matter,” Huseyin Celik, deputy chairman of the ruling AK Party, told CNN Turk. “I apologize to our people.”Soon after, the relief agency’s chairman told the news channel that 12,000 more tents would be delivered to Van on Tuesday. Deputy Prime Minister Besir Atalay, overseeing relief operations in Van, said: “From today there will be nothing our people lack.”

Whatever the shortcomings of the relief operation, the disaster posed little risk to Prime Minister Tayyip Erdogan, who secured a third consecutive term with a strong majority at a national election in June.The trauma of the quake is one more problem to bear for Kurds, the dominant ethnic group in southeast Turkey, where more than 40,000 people have been killed in a three-decade-long separatist insurgency.”We escaped from terrorism but now we are faced with an earthquake,” said Osman Bayram, a 26-year-old teacher, who had move to Van from a more restive part of the southeast.

The center of Van, a city of 1 million people, resembled a ghost town with no lights in the streets or buildings. Hardly any people could be seen.The sense of dislocation was greater in Ercis. With no homes to return to, thousands of people, mostly men, paced the streets, stopping to look at the destruction or whenever there was some commotion at a rescue operation site.

At one collapsed building on the main road leading through Ercis, the area worst hit in Sunday’s quake, exhausted rescue workers shouted at crowds of men pushing forward to catch a glimpse as efforts were made to free the corpse of a woman from the rubble.”Get back! Are you not human? Show some respect! Do we not have any honor or pride?” one rescue worker yelled. – Yahoonews