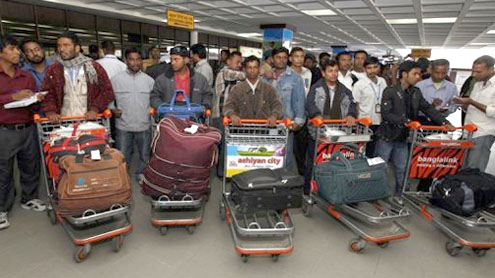 DHAKA: Bangladesh plans to send tens of thousands of construction workers and other employees back to Libya after the death of Muammer Gaddafi, a minister said Sunday.

Bangladesh’s economy has been hit hard by the eight months of unrest in Libya as at least 36,000 Bangladesh migrant workers had to return home, leaving jobs in the oil-rich country. But labour and employment minister Khandaker Mosharraf Hossain said the death on Thursday of the former Libyan leader would allow the Bangladesh government to push ahead with its plans.

“We’ve already established contact with the transitional authorities. The country will need a lot of workers to reconstruct its economy. We hope we can send tens of thousands of workers there shortly,” Hossain told reporters. The minister said many companies that shut down factories during the unrest were also keen to reinstate Bangladeshi workers to their old jobs.

More than 70,000 Bangladeshis were working in Libya when the rebellion against Gaddafi broke out early this year. Most of them returned home as the violence worsened. But, afraid that they may not have found new overseas jobs, thousands of Bangladeshis — including nurses and engineers — stayed back, enduring months of clashes between the rebels and forces loyal to Gaddafi. – Dailytimes