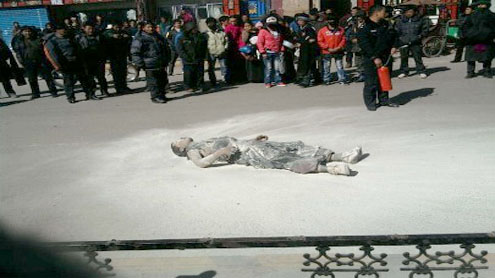 A Tibetan nun has set herself on fire near a restive monastery in western China, in the ninth such incident in recent months, reports say.

The Free Tibet group said the 20-year-old nun,Tenzin Wangmo, died on Monday in Sichuan province’s Aba county.A witness told Radio Free Asia (RFA) that she called for freedom for Tibet before she set herself on fire.Aba county is home to the Kirti monastery, the scene of repeated protests against Beijing’s rule.

Seven monks from the monastery, which lies in an ethnic Tibetan area of Sichuan province, have set themselves on fire there in recent months. An eighth monk set himself on fire in another part of Sichuan province.China has since jailed three monks accused of assisting in one self-immolation and maintains a heavy security presence in Aba town.Reports said the young nun set fire to herself after midday.”A nun killed herself by setting her body on fire,” Aba Jigme, a resident, told RFA. “But she died on the spot after calling for freedom for Tibet and the return of the Dalai Lama.”

He said she chose to do it away from the centre of town because of the heavy Chinese security presence.On Wednesday the Tibetan exile community is to hold a prayer ceremony for those who have set themselves on fire.In a statement, Free Tibet Director Stephanie Brigden said that unrest in Tibet was “escalating and widening”.”The acts of self-immolation are not taking place in isolation, protests have been reported in the surrounding region and calls for wider protests are growing,” she said.

Free Tibet also reported that two Tibetans were shot by Chinese troops during a protest outside a police station in another part of Sichuan province on 16 October.Their condition was not known and it was not clear why they were shot, the group said.This report cannot be confirmed. Foreign media cannot gain access to restive ethnic Tibetan areas and Chinese state media often do not report these incidents.Chinese Foreign Ministry spokesman Liu Weimin told a regular news briefing he had no information about the nun’s case.”We believe that promoting and encouraging harm to life is immoral,” he said. – BBC