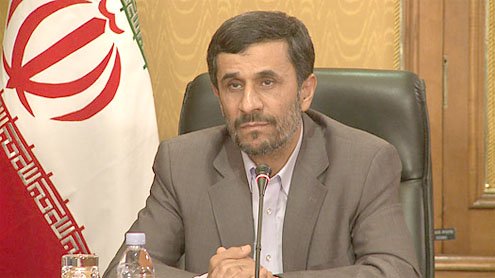 Iran’s president has said US claims of a plot to assassinate a Saudi envoy are as false as its allegations were about weapons of mass destruction in Iraq.

Mahmoud Ahmadinejad said the US had hoped to make people forget about its “internal economic problems”.In an appearance on al-Jazeera he also said the US was looking for an excuse to toughen sanctions against Iran.Saudi Arabia meanwhile asked the UN Security Council to look into what it called a “heinous conspiracy”.Secretary General Ban Ki-moon said he had passed correspondence about the affair to the Security Council.

Two men, one a used-car salesman who lived in Texas, were charged last week over the alleged plot to assassinate the Saudi ambassador to Washington using explosives.President Ahmadinejad said on Monday in a live interview on al-Jazeera television: “In the past the US administration claimed there were weapons of mass destruction in Iraq.”They said it so strongly, they offered and presented documentations and everyone said, ‘yes, we believe in you, we buy it’.””Now is everyone asking them, were those claims true? Did they find any weapon of mass destruction in Iraq? They fabricated a bunch of papers. Is that a difficult thing to do?

“The truth will be revealed ultimately and there will be no problem for us at that time.”He added that he did not think Iran and the US were heading for military conflict.”I think that there are some people in the US administration who want this to happen, but I think there are wise people in the US administration who know they shouldn’t do such a thing,” Mr Ahmadinejad said.

He accused Washington of trying to create divisions between Iran and Saudi Arabia, which is a US ally and Tehran’s main rival in the Gulf.The US Treasury has placed sanctions on five individuals, including the two accused, and an Iranian airline, Mahan Air, over the alleged plot.Mr Ahmadinejad is the latest Iranian senior official to dismiss the claims, although Supreme Leader Ayatollah Ali Khamenei has not yet commented publicly. – BBC