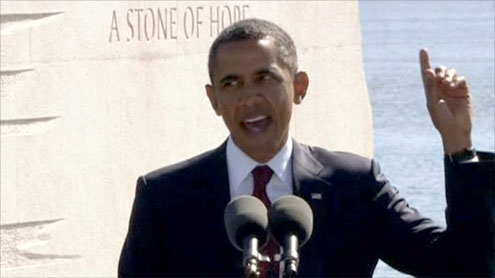 President Obama’s regulatory team is hurting U.S. competitiveness and slowing the growth of the economy because of its members’ lack of business experience, the head of the nation’s largest consumer electronics trade group said Monday.

“They’re doing things that are very harmful to the economy,” Mr. Shapiro told editors and reporters at The Washington Times, citing Mr. Obama’s policies on health care, labor relations and financial regulation. “They’re not bad people. They just have no experience with business. And that’s the frustration.”

Mr. Shapiro accused Mr. Obama of driving a mindset that “business is evil.” This has led corporate America to feel like “there’s not a sympathetic ear at all” in the White House.“So, essentially, the White House has taken this position that business and government must be divorced totally,” Mr. Shapiro said. “It’s the ‘business is the enemy’ thinking.“I don’t think that’s a healthy thing to do,” he added.Meanwhile, the fight for spectrum between the wireless and broadcast industries continues.

Mr. Shapiro said wireless technology, or broadband, is an innovative industry of the future and deserves the space of the declining broadcast television industry.“Almost everyone has radio or newspapers or a telephone,” he said. “Not getting TV service is really not important.”But broadcasters say their systems are more efficient than wireless and are still important to millions of Americans who can’t afford cable television.

“The collateral damage for our television stations going forward would be catastrophic,” said Gordon H. Smith, president and CEO of the National Association of Broadcasters.Mr. Shapiro said viewers won’t lose broadcast TV altogether.“You’re not going to lose your TV service, because there’s still going to be a few broadcasters in every market,” he said. “So it’s not like people are going to be disenfranchised.”He said the wireless industry is growing with booming interest in devices such as smartphones and tablet computers. Meanwhile, broadcasters have dropped to a 10 percent market share. – WT