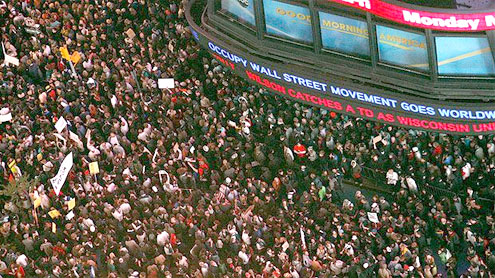 Galvanized by the Occupy Wall Street movement, protests began in New Zealand, touched parts of Asia, spread to Europe, and resumed at their starting point in New York with 5,000 marchers decrying corporate greed and economic inequality.After weeks of intense media coverage, US protests have still been smaller than G20 meetings or political conventions have yielded in recent years. Such events often draw tens of thousands of demonstrators.

The demonstrations by the disaffected coincided with the Group of 20 meeting in Paris, where finance ministers and central bankers from major economies were holding talks on the debt and deficit crises afflicting many Western countries.The Occupy Wall Street movement has gathered steam for a month, culminating with the global day of action. It remains unclear what momentum the movement, which has been driven by social media, has beyond Saturday.

While most rallies were relatively small and barely held up traffic, the Rome event drew tens of thousands of people and snaked through the city center for miles (kilometers).Hundreds of hooded, masked demonstrators rampaged in some of the worst violence seen in the Italian capital in years, setting cars ablaze, breaking bank and shop windows and destroying traffic lights and signposts.

Police fired volleys of tear gas and used water cannon to try to disperse militant protesters who were hurling rocks, bottles and fireworks, but clashes went on into the evening.Smoke bombs set off by protesters cast a pall over a sea of red flags and banners bearing slogans denouncing economic policies the protesters say are hurting the poor.The violence sent many peaceful demonstrators and local residents near the Colosseum and St. John’s Basilica running into hotels and churches for safety.American protesters are angry that US banks are enjoying booming profits after getting massive bailouts in 2008 while average people are struggling in a tough economy with more than 9 percent unemployment and little help from Washington.

In New York, where the movement began when protesters set up a makeshift camp in Lower Manhattan on Sept. 17, organizers said the protest grew to at least 5,000 people as they marched to Times Square in midtown Manhattan.Some were disappointed the crowd was not larger.“People don’t want to get involved. They’d rather watch on TV,” said Troy Simmons, 47, who joined demonstrators as he left work. “The protesters could have done better today. … People from the whole region should be here and it didn’t happen.”

The Times Square mood was akin to New Year’s Eve, when the famed “ball drop” occurs. In a festive mood, protesters were joined by throngs of tourists snapping pictures, together counting back from 10 and shouting, “Happy New Year.”Police said three people were arrested in Times Square after pushing down police barriers and five men were arrested earlier for wearing masks. Police also arrested 24 people at a Citibank branch in Manhattan, mostly for trespassing.At about 8 p.m., police arrested another 42 people for blocking the sidewalk. Protesters complained they had no place to go with a wall of police in riot gear in front of them and thousands of demonstrators behind them leaving Times Square.

Small and peaceful rallies got the ball rolling across the Asia-Pacific region on Saturday. In Auckland, New Zealand’s biggest city, 3,000 people chanted and banged drums.In Sydney, about 2,000 people, including representatives of Aboriginal groups, communists and trade unionists, protested outside the central Reserve Bank of Australia.Hundreds marched in Tokyo. Over 100 people gathered at the Taipei stock exchange, chanting “we are Taiwan’s 99 percent” and saying economic growth had only benefited companies while middle-class salaries barely covered basic costs.In Hong Kong, home to the Asian headquarters of investment banks including Goldman Sachs, over 100 people gathered at Exchange Square in the Central district. Students joined with retirees, holding banners that called banks a cancer.

Portugal was the scene of the biggest reported protest action, with more than 20,000 marching in Lisbon and a similar number in the country’s second city Oporto, two days after the government announced a new batch of austerity measures.Hundreds broke through a police cordon around the parliament in Lisbon to occupy its broad marble staircase.

“This debt is not ours!” and “IMF, get out of here now!,” demonstrators chanted. Banners read: “We are not merchandise in bankers’ hands!” or “No more rescue loans for banks!“Around 4,000 Greeks with banners bearing slogans like “Greece is not for sale” staged an anti-austerity rally in Athens’ Syntagma Square, the scene of violent clashes between riot police and stone-throwing youths in June.

Many were furious at how austerity imposed by the government to reduce debt incurred by profligate spending and corruption had undermined the lives of ordinary Greeks.In Paris, around 1,000 protesters rallied in front of city hall, coinciding with the G20 finance chiefs’ meeting, after coming in from the working class neighborhood of Belleville where drummers, trumpeters and a tuba revved up the crowd.“This is potentially the start of a strong movement,” said Olivier Milleron, a doctor whose group of trumpeters played the classic American folk song “This land is your land.”The Rome protesters, who called themselves “the indignant ones,” included unemployed, students and pensioners.

“I am here to show support for those don’t have enough money to make it to the next pay check while the ECB (European Central Bank) keeps feeding the banks and killing workers and families,” said Danila Cucunia, a 43-year-old teacher.“We can’t carry on any more with public debt that wasn’t created by us but by thieving governments, corrupt banks and speculators who don’t give a damn about us,” said Nicla Crippa, 49. “They caused this international crisis and are still profiting from it. They should pay for it.”In imitation of the occupation of Zuccotti Park near Wall Street in Manhattan, protesters have been camped out across the street from the headquarters of the Bank of Italy for days.

The global protests were a response to calls by New York demonstrators for others to join them. Their example has prompted similar occupations in dozens of US cities.At a small protest in Dublin, Ireland, Gordon Lucas, an unemployed software developer said “We don’t have economic democracy anymore. … I don’t feel I am being represented.”In Madrid, around 2,000 people gathered for a march to the central Puerta del Sol. Placards read: “Put the bankers on the bench” and “Enough painkillers — euthanasia for the banks.”

“It’s not fair that they take your house away from you if you can’t pay your mortgage, but give billions to the banks for unclear reasons,” said 44-year-old telecom company employee Fabia, who declined to give her surname.In Germany, thousands gathered in Berlin, Hamburg, Leipzig and outside the European Central Bank in Frankfurt.Demonstrators gathered peacefully in Paradeplatz, the main square in the Swiss financial center of Zurich.In London, around 2,000 people assembled outside St. Paul’s Cathedral, near the City financial district, for a rally dubbed “Occupy the London Stock Exchange.”

Joe Dawson, 31, who lost his job as a product developer at Barclays Bank, said he had taken his two children aged 10 and 8 to the rally to show them people had a voice.“I’m not passive anymore and I don’t want them to be. This is their future too,” Dawson said. “I work four jobs part-time, I take whatever I can get.”WikiLeaks founder Julian Assange told the crowd: “I hope this protest will result in a similar process to what we saw in New York, Cairo and Tunisia,” he said, referring to revolutions in the Arab world.Outside of New York, similar protests were held in other US cities and Canada. Hundreds turned out in Washington, D.C., while a couple of thousand people gathered near Toronto’s financial district as well as in Portland, Oregon.A protest in Los Angeles drew about 5,000 people. – Arabnews