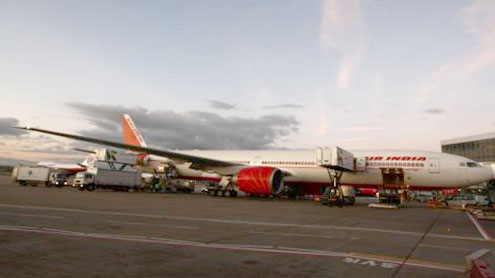 Passengers were stranded on a plane on the tarmac at Gatwick Airport for more than eight hours after fog caused their flight to be diverted.

The Air India flight was on its way from Mumbai to Heathrow Airport when the weather conditions forced it to divert to Gatwick at about 0800 BST.It resumed its journey at 1700 BST, arriving at Heathrow 20 minutes later.A spokesman for the Sussex airport said the airline had to wait for a crew before it could complete its journey.Sussex Police were called to the flight to prevent a breach of the peace as tempers among passengers flared.

A BBC World Service reporter on board said the mood on the plane became heated.Rahul Joglekar said he did not know why the passengers were prevented from disembarking the aircraft.Air India was unavailable for comment.One passenger, Mark Shorey, said passengers were given a note of apology by the airline when they got off the plane at Heathrow, but that he was not satisfied with the response.He said: “I’m angry at just being in the dark and we still are. I don’t really understand what happened today.”

Mr Shorey said: “I don’t understand why we were diverted then not allowed to leave. I felt I was already home, I was in London, I didn’t mind the extra hassle of coming from Gatwick into London.”Jas Johal, who was also on the plane, said: “There were promises of food and refreshments on board. Everyone was very hungry. There was no sign of any food. I myself asked them several times, then they brought out some more crisps and Coke.”He added: “By this time, after almost eight hours without any food, people were willing to lose their calmness.”

Passenger Victoria Denham said she would be complaining to the airline and seeking compensation for the delay.Miss Denham, from Rotherham, said that when they landed at 0810 BST they were told they were just waiting for the fog to clear.More announcements followed saying the fog had not cleared to regulation levels, she said.”People started to get quite restless and talk to staff at the airplane door,” she said.But Miss Denham added: “There were rumours flying around the whole cabin but I have to admit people were calm and anti-confrontational.” – BBC