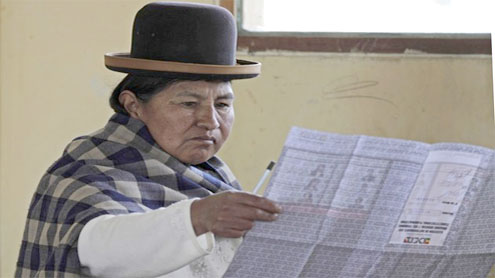 LA PAZ, Bolivia: Most Bolivians who voted in Sunday’s election to choose the country’s top judges cast invalid ballots in what would be a stinging rebuke for President Evo Morales, according to unofficial partial results.

If the results hold, it would the first defeat at the polls for the leftist coca-grower’s union leader of his nearly six-year presidency.Official results were not expected for at least five days in the vote for 56 judgeships on Bolivia’s top four tribunals, including its supreme and constitutional courts.But an unofficial count by the Ipsos, Opinion y Mercado polling firm found 61 percent of voters cast ballots that were either null or blank. It said its count was based on 75 percent of the vote.

A sober-looking Morales declared himself “very pleased with the public’s participation” in brief words to the news media. He asserted that “those who called the boycott have failed.”Opposition leaders had called on voters to cast invalid ballots to protest what they considered a power grab.They contended that the election would erode the independence of the judiciary and strengthen Morales because the 114 candidates were chosen by a Congress dominated by his governing MAS movement.

A leading opposition politician, Samuel Doria Medina, said the results proved the election was “illegitimate.” He called for starting the judicial selection process from scratch.Under electoral rules, only a majority of valid votes are needed to fill each judicial post.Prior to a new constitution championed by Morales and approved by voters, the legislature chose judges for the top courts.

The opposition accuses Morales of using the judiciary to persecute adversaries. Several opposition leaders are in exile after being accused of sedition. Morales comfortably won re-election in December 2009 but his popularity has plummeted in the past year over policy decisions that angered many Bolivians.

First, Morales declared just after Christmas that he was ending subsidies on gasoline; he reversed himself after major protests.Then he insisted on a highway through a lowlands indigenous preserve, and drew further public outrage when police last month attacked Indians marching against it.Morales has indicated he wants to run for a third term in 2014. – Yahoonews