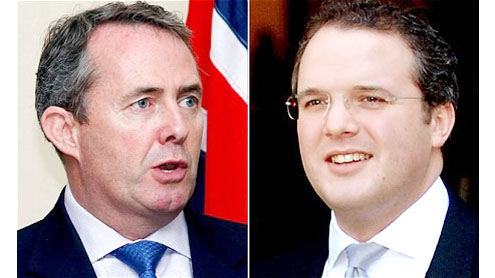 Dr Fox became the first Tory Cabinet minister in David Cameron’s government to stand down, after more than a week of revelations about his relationship with his best man, Adam Werritty.

The Defence Secretary announced that he was resigning after detailed disclosures showed Mr Werritty’s activities were funded by companies and individuals that potentially stood to benefit from Government decisions.Within an hour of Dr Fox stepping down, the venture capitalist Jon Moulton, who provided money for Mr Werritty, said the Defence Secretary had asked him to give cash to his friend’s firm. It is understood that an investigation into Dr Fox’s dealings with Mr Werritty by Sir Gus O’Donnell, the Cabinet Secretary, had concluded that his position was untenable.

In a letter to the Prime Minister, Dr Fox repeated his belief that he had “mistakenly allowed the distinction between my personal interest and my Government activities to become blurred”.He will be replaced by Philip Hammond, who moves from the Transport Department. Justine Greening, the Treasury Minister, will replace Mr Hammond, Downing Street said last night. Dr Fox is only the second senior member of the Government to resign since the election, and the first Conservative Cabinet minister. His resignation followed the disclosure that Mr Werritty’s company, Pargav, was funded by a private intelligence firm and the chairman of an Israeli lobbying company.

Mr Werritty was interviewed yesterday by Cabinet Office officials and is understood to have admitted that several other individuals and companies had provided money.One of the other backers was said to be a division of a major international bank.Last night, it emerged that Dr Fox had personally asked potential donors to provide money for Mr Werritty’s company.Mr Moulton, whose investment firm owns a company called Gardner UK, which makes military aircraft components, said in a statement: “After the election I was asked by Dr Fox to provide funds to a non-profit group called Pargav involved in security policy analysis and research. After obtaining written assurances as to its activities I provided personal funding to Pargav. I will not be doing this again.”

Mr Moulton has twice donated £50,000 to Dr Fox’s office when he was shadow defence secretary, all of which was properly declared.Earlier this week, Dr Fox admitted that he had 22 meetings at the Ministry of Defence and 18 meetings abroad with Mr Werritty. The self-styled adviser was one of Dr Fox’s closest friends.However, Mr Werritty was also receiving money from about five or six individuals and companies to fund his international travel to meet Dr Fox. Whitehall rules make clear that ministers must declare any potential conflict between their personal and professional lives.

The Daily Telegraph also disclosed yesterday that Dr Fox and Mr Werritty attended a dinner with defence lobbyists and senior US military figures which was not disclosed by the Ministry of Defence.A week after the dinner in Washington DC, rules allowing the sale of US defence equipment to Britain were relaxed.Yesterday, Dr Fox and Downing Street were confronted with an array of new claims that were set to be published in the weekend newspapers.Sir Gus is to complete an inquiry into links between the Defence Secretary and Mr Werritty over the weekend.

Cabinet officials are thought to have been alarmed by the information that has been uncovered, suggesting multiple breaches of Whitehall rules.In his resignation letter, Dr Fox said he was “very sorry”. He said: “I have always placed a great deal of importance on accountability and responsibility.“I mistakenly allowed the distinction between my personal interest and my Government activities to become blurred. The consequences of this have become clearer in recent days.“I have also repeatedly said that the national interest must always come before personal interest. I now have to hold myself to my own standard.”

Mr Cameron, who has had a volatile relationship with Dr Fox, thanked him for his service. In his letter, released by Downing Street last night, the Prime Minister said: “I understand your reasons for deciding to resign as Defence Secretary, although I am very sorry to see you go.”Senior Downing Street sources stressed that Dr Fox had “come to the conclusion to resign himself”.here was some concern in the Prime Minister’s office that Mr Cameron and Dr Fox were due to attend a high-profile military event together tomorrow with members of the Royal family.

It was feared that the event might have become a “media circus”.Last night, Labour said it still wanted to see the results of Sir Gus’s inquiry into Dr Fox, to be published next week.Jim Murphy, the shadow defence secretary, said the resignation “was unavoidable and inevitable”. He said: “Throughout these events I haven’t called for Liam Fox’s resignation but just the full truth. –