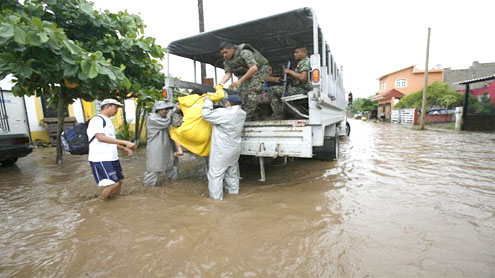 Mexico:Mexican authorities on Thursday raised to six the death toll from Hurricane Jova, which hit along the Pacific coast as a Category 2 storm, and warned the storm’s remnants could affect opening ceremonies of the Pan American Games.

The body of a man who apparently had been swept away by a river current was found covered with mud in the town of Cihuatlan in Jalisco state, said civil protection spokesman Juan Pablo Vigueras. The games are scheduled to open in Jalisco on Friday.The five other victims drowned, were killed by mudslides or died in a collapsed house.Rain from the remnants of Jova may change the open-air inauguration of the Pan American Games in the western city of Guadalajara, said Bernardo de la Garza, Mexico’s top sports official.

Heavy rain falling on Mexico’s west coast also may affect training sessions for the games’ triathlon, sailing and beach volleyball, he said. All three competitions are to be held in the beach resort of Puerto Vallarta just north of where Jova hit land early Wednesday.Farther south, a low-pressure system continued to dump rain on southern Mexico and Central America, where it was blamed for the deaths of 15 people in Guatemala. Rains will likely continue during the next couple days as the system hovers over southeastern Mexico, Guatemala and El Salvador, said the National Hurricane Center in Miami, Florida.

Guatemalan Vice President Rafael Espada said four people are missing.He urged Guatemalans on Thursday to use the country’s highways only for emergencies, saying several were damaged by the storm or are blocked by mudslides.The storm damaged at least 2,000 homes, said Alejandro Maldonado, director of Guatemala’s disaster prevention agency.Meanwhile, Tropical Depression Irwin was expected to weaken as it swirled over the Pacific off Mexico’s coast and was forecast to become a remnant low within 24 hours, the hurricane center said.

Irwin’s maximum sustained winds Thursday afternoon were near 40 mph (65 kph). The storm was centered about 145 miles (235 kilometers) west of Manzanillo, Mexico, and was moving east at 6 mph (9 kph).The depression’s was predicted to begin curving away from Mexico by Friday morning and head back out over the Pacific. – Yahoonews