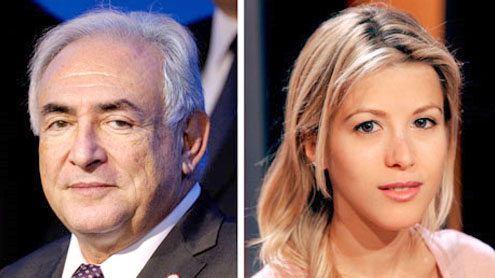 A French inquiry into attempted rape claims against ex-IMF chief Dominique Strauss-Kahn has been dropped.

The prosecutor’s office said the evidence suggested sexual assault – a less serious offence than attempted rape, with a shorter statute of limitations.Writer Tristane Banon had accused Mr Strauss-Kahn of attempted rape in 2003.Her accusation emerged while Mr Strauss-Kahn was accused of rape in New York; that case was later dropped.Prosecutors said in a statement that “it is clear that, for lack of sufficient proof, a prosecution may not be initiated over the count of attempted rape, but facts that could be described as sexual assault have meanwhile been recognised”.

Under French law, the statute of limitations for attempted rape is 10 years, but three years for sexual assault.Ms Banon’s lawyer described the decision as a victory: “[Mr Strauss-Kahn] will have to be satisfied with being an unconvicted sex attacker, protected by the statute of limitations, allowing him to escape criminal prosecution, but not a legitimate suspicion,” lawyer David Koubbi said.The ruling demonstrated “the facts that [Ms Banon] complained of were not ‘imaginary’ contrary to Mr Strauss-Kahn’s claims”, he added.

Mr Strauss-Kahn’s lawyer has said the decision means her client has been “completely cleared”.’Advance’Ms Banon has indicated she may still file a civil suit against Mr Strauss-Kahn.As part of the police inquiry, Mr Strauss-Kahn and Ms Banon confronted each other at a Paris police station at the end of September.Ms Banon said Mr Strauss-Kahn had tried to rape her during an interview for a book.

Mr Strauss-Kahn was previously said to have admitted making “an advance” on Ms Banon, but denied any violence and is suing for slander.He resigned from his job as head of the International Monetary Fund after a New York hotel maid accused him of attempted rape earlier this year.He still faces a civil suit in the US by his alleged victim in New York, Nafissatou Diallo. – BBC