After 350 years, Irish judges throw off their wigs 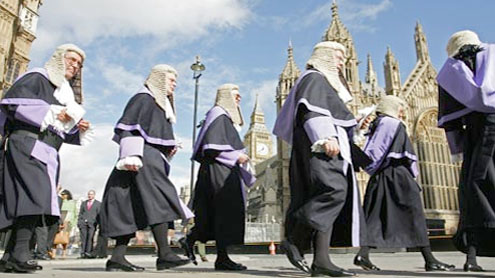 DUBLIN: Ireland’s judges are to end the tradition of wearing horsehair wigs that dates back over 350 years to British colonial rule, the country’s Courts Service said Thursday.

“A change in Court Rules made today, will end the requirement for judges to wear wigs in court,” a statement said.The Superior Courts Rules Committee, chaired for the first time by recently appointed Chief Justice Susan Denham — Ireland’s first female top judge — approved the court rules change that does away with the requirement for ceremonial wigs to be worn in the Supreme and High Courts.

A similar rule change will apply to judges in the Circuit Court after the change is signed into law by Justice Minister Alan Shatter.Wigs have been worn in court as “a matter of rule, tradition and law” since about 1660, the time of the restoration of the English monarchy, and survived Ireland’s transition to independence in 1921.

The change will mean a saving for Ireland’s cash-strapped taxpayer as newly appointed judges buying a wig had to pay about 2,200 euros ($3,000).The Service said the decision to dispense with wigs is complementary to a rule change made some time ago which removed the necessity to address a judge in court as “My Lord”.It is now the rule that a judge be referred to simply as “Judge” or in the Irish language as “A Bhreithim”. – Khaleejnews

King’s dream lives on… or does it?