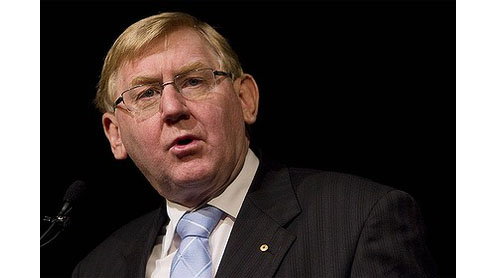 The federal government is threatening to intervene in an industrial dispute at Qantas, warning trade unions they should not set out to damage local industry.

The airline today said it would ground five of its aircraft and cut up to 100 domestic flights a week because of the impact of ongoing industrial action.Tourism Minister Martin Ferguson, following his address to an industry conference in Canberra, said the sector’s patience was running out with the unions.”The sooner the parties get in a room and sort it out the better,” he told reporters.If they did not, the government could require the parties to resolve their issues under the umbrella of the Fair Work Act.

The act already provided that, in exceptional circumstances, industrial action that had wider implications than for just one business can be suspended or terminated if it threatened significant damage to the economy or to the welfare or safety of the population, Mr Ferguson said.The Australian tourism industry depended on a vital and strong aviation sector, he said.He described as “un-Australian” comments by Australian Licensed Aircraft Engineers association secretary Steve Purvinas urging people to boycott Qantas.They also were a sad reflection of his leadership.

“You can have a dispute with employers but there is a responsibility on trade union leaders to never set out to damage Australian industry,” Mr Ferguson, a former president and vice-president of the Australian Council of Trade Unions, said.That responsibility applied not just to Qantas but also to struggling small and medium-sized tourism businesses who were doing it exceptionally tough.They employed workers on far lower wages and conditions than licensed aircraft engineers employed by Qantas, Mr Ferguson said.

Australian Tourism Export Council managing director Felicia Mariani said thousands of small tourism operators were the silent victims of the industrial action.The entire tourism industry relied on the effective delivery of aviation services bringing international visitors to Australia and distributing them around the country, she said.”Any disruption to services has a significant direct impact on the bottom line of local tourism businesses.” – SMH