US Breaks Up Major Terror Plot by Iran 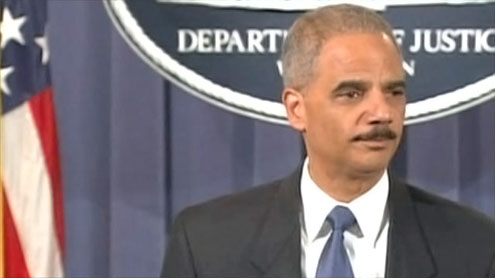 The US says it has broken up a plot by agents linked to Iran to assassinate the Saudi ambassador to Washington using explosives.

Two men originally from Iran – one a naturalised US citizen – have been charged with counts of conspiracy, Attorney General Eric Holder said.The plot was “conceived” in Iran by the Quds force, part of Iran’s Revolutionary Guard Corps, he added.The state department has listed Iran as a “state sponsor” of terror since 1984.

Mr Holder said the alleged plot was a “flagrant violation of US and international law” that had been “conceived, sponsored and directed by Iran.Iran’s official Islamic Republic News Agency called the charges a “propaganda campaign” by the US government against Tehran.The allegations were “a comedy show fabricated by America”, Iranian foreign ministry spokesman Ramin Mehmanparast told the semi-official Iranian news agency, Fars.The Saudi embassy in Washington DC said the alleged plot was “a despicable violation of international norms, standards and conventions and is not in accord with the principles of humanity”.

The two accused were named as Manssor Arbabsiar, a 56-year-old naturalised US citizen with dual Iranian and US passports, and Gholam Shakuri, based in Iran and said to be a member of Iran’s Quds Force.Mr Arbabsiar, who was arrested at New York’s John F Kennedy airport on 29 September, has confessed to his involvement in the alleged plot, Mr Holder said.Mr Shakuri was said to be in Iran.US officials said that on 24 May 2011, Mr Arbabsiar made contact with an informant for the US Drug Enforcement Agency, who was posing as a Mexican drug cartel member.

Over a series of meetings, it is said that details emerged of a conspiracy involving members of the Iranian government paying $1.5m (£960,000) for the assassination of Saudi ambassador Adel al-Jubeir on US soil.Justice department officials said the initial envisaged target was the Saudi embassy.But in conversations secretly recorded for the US authorities, Mr Arbabsiar also allegedly considered having the ambassador killed at a purported favourite restaurant, despite the possibility of mass casualties.The plot would have been carried out with explosives, Mr Holder said. But he added that no explosives were ever put in place and the public was not in danger.

Mr Holder said Mr Arbabsiar, with approval from Mr Shakuri, wired $100,000 to a US bank account for the informant as a downpayment.Mr Arbabsiar and Mr Shakuri have been charged with conspiracy to murder a foreign official, weapons conspiracy, and conspiracy to commit international terrorism charges.President Barack Obama is said to have been informed of the alleged plot in June 2011 and was kept up to date with developments.White House spokesman Tommy Vietor said: “The disruption of this plot is a significant achievement by our intelligence and law enforcement agencies, and the president is enormously grateful for their exceptional work.”

The treasury department later announced sanctions against five people – including Mr Arbabsiar and Mr Shakuri – whom it linked to the alleged plot.FBI Director Robert Mueller told reporters: “Though it reads like the pages of a Hollywood script, the impact would have been very real and many lives would have been lost.”Secretary of State Hillary Clinton later told a news conference the US would consult with its international partners to send a “very strong message” over the alleged plot.Mr Arbabsiar appeared briefly at a New York City court on Tuesday. He did not enter a plea and was held without bail.He could face a life prison sentence if convicted on all charges, the Department of Justice said.Criminal charges were brought in the southern district of New York because the alleged $100,000 downpayment was wired through a bank in the area, officials said. – BBC