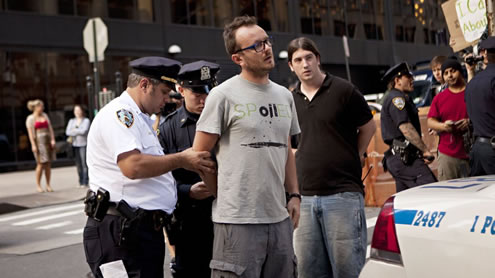 NEW YORK (AP) — As the protest on Wall Street enters its fourth week, police officers are keeping their posts around the perimeter of the park at the center of it all. And with no end in sight, the cost of constant police surveillance will continue to rise at a time when Mayor Michael Bloomberg has ordered citywide budget cuts.

The New York Police Department already has spent $1.9 million, mostly in overtime pay, to patrol the area near Zuccotti Park, where hundreds of protesters have camped out for several weeks. Though cold weather is on the way in, protesters don’t plan on leaving anytime soon. They’re prepared to stay put for the long haul.”The bottom line is that people want to express themselves, and as long as they obey the laws, we allow them to,” Bloomberg told reporters Monday when asked about the protesters’ staying power. “If they break the laws, then we’re going to do what we’re supposed to do — enforce the laws.”Last week, Bloomberg ordered all agencies to prepare to cut expenses by a total of $2 billion during the next 18 months. Police Commissioner Raymond Kelly said the budget cuts may cause the cancellation of a new class of police officers entering the academy in January.

Police officials would not comment Monday on whether the Occupy Wall Street protest would have any bearing on how the budget cuts would play out. A spokesman for Bloomberg declined to comment on any financial issues.”We always prefer to not spend overtime, but again, this is a big complex city, lots of things going on,” Kelly said last week, describing the protesters’ effect on the NYPD. “And we have to spend overtime for unplanned operations.”The protesters say they’re fighting for the “99 percent,” or the vast majority of Americans who do not fall into the wealthiest 1 percent of the population; their causes range from bringing down Wall Street to fighting global warming. The movement gained traction through social media, and protests have taken place in several other cities nationwide.

On Monday, the Rev. Al Sharpton and rapper Kanye West made appearances at the park. A group of mothers also took small children downtown to teach them about the movement, calling themselves the “99 Percent School.”Several hundred protesters briefly marched through the Wall Street neighborhood Monday evening, honking horns and chanting.”The banks got bailed out, we got sold out!” went one chant.”All day, all week, occupy Wall Street,” went another.Police walked alongside the marchers as they traveled down Broadway, through Wall Street, down Beaver Street and up Broad Street.

In Boston, hundreds of college students marched through downtown Monday and gathered on Boston Common, holding signs that read “Fund education, not corporations.” The protesters said they’re angry with an education system they say mimics what they call the “irresponsible, unaccountable, and unethical financial practices” of Wall Street.In New York, officers from the city’s First Precinct are patrolling the area near Wall Street, and other squads help out as necessary, depending on the size and movement of the demonstrators. If the crowd seems to be growing on a particular day, the NYPD dispatches more officers to the area, Kelly said.”We are down 6,000 police officers from where we were 10 years ago, so it’s difficult to do any type of protracted operation with people who are working in their regular tour of duty,” Kelly said.

There are many events in New York City that require a police presence, like parades, said James Parrott, deputy director and chief economist for the Fiscal Policy Institute.By comparison, it cost about $50 million for one week to secure the Republican National Convention in 2004, which included massive protests and other events around the city. The figure was later reimbursed by the federal government, but so far there is no reason for the protest security to be paid for by anyone other than New York taxpayers.”To some extent this sort of thing happens a lot in New York City,” Parrott said. “$2 million in the context of a $66 billion annual budget is not a deal breaker.”

Most of the protesters seem to share that view. Mark Bray, a spokesman for the protesters who was working the media table at Zuccotti Park on Monday, questioned the need for such a strong police presence in the first place.”If your argument is that police expense equals an ineffective message, how are you ever going to form a movement?” he said. “Because the police always come out, you know?”Associated Press writers Deepti Hajela and Colleen Long contributed to this report. – news.yahoo

Dr Tahir did not take colleagues, N into confidence