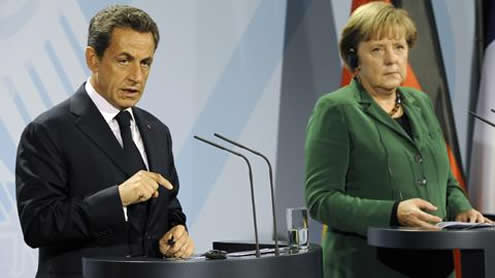 French and German leaders say they will present plans to stabilize the crisis-stricken eurozone by the end of the month. The agreement by Europe’s two economic powerhouses comes ahead of a key Group of 20 summit early next month.
At a news conference in Berlin with German Chancellor Angela Merkel, French President Nicolas Sarkozy said the two leaders agreed on ways to halt the debt crisis spreading across the 17 nations sharing the euro currency.

Mr. Sarkozy said the measures include recapitalizing shaky European banks, which he said is critical to ensure that the European economy grows and prospers.The latest bank to be hit by the financial crisis is the Franco-Belgium bank Dexia. The French, Belgium and Luxembourg governments reached agreement Sunday to dismantle the bank.Mr. Sarkozy said Paris and Berlin are waiting for a report by financial experts on Greece’s progress in implementing key reforms in order to receive another installment of bailout funds. But he said the two nations agreed on finding a lasting and global response to the debt crisis.

The crisis that has hit both shaky European economies like Greece and Portugal and a number of European banks that have lent them money has sparked growing alarm, not only in Europe but also overseas. U.S. President Barack Obama has urged the Europeans to come up with a plan to resolve the spreading crisis before an early November summit of the Group of 20 leading economies.Mr. Sarkozy vowed that Europe will have resolved its problems before the G20 summit, which takes place in the French resort town of Cannes. European leaders are certain to be discussing ways to do so when they meet in Brussels later this month. – Voanews