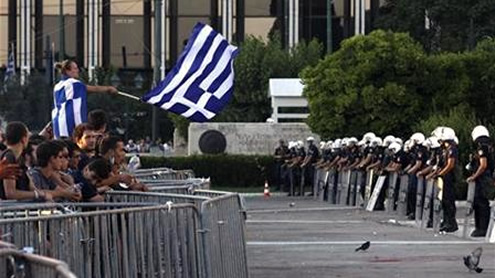 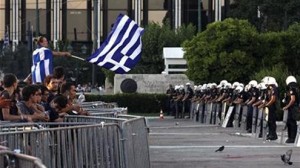 LUXEMBOUR: Europe again put off a decision on unblocking promised loans to Greece, ordering Athens to slash government spending and sell off the family silver, but ruled out Tuesday any default or eurozone exit. Eurozone chief Jean-Claude Juncker said a rescue fund to be used for a second Greek bailout, agreed in July but frozen with auditors now demanding a three-year rewrite of Athens spending plans, will be made more “efficient,” although he refused to increase its size. Greek Prime Minister George Papandreou, who only on Sunday announced deep cuts for 2012 in a bid to unblock promised EU and IMF funds, will now have to agree “additional measures” with international auditors “to close any remaining gaps for 2013 and 2014,” Juncker said.

His comments came after seven hours of talks between eurozone finance ministers in Luxembourg. The ministers had downplayed the chances of eight billion euros in loans originally set for September being re-activated; prompting Greek Finance Minister Evengelos Venizelos to suggest Athens was being made a “scapegoat” for wider eurozone debt troubles. In the end Venizelos was sent back to the drawing board, with a demand to secure creditors’ agreement on a new massive overhaul of the rapidly shrinking Greek economy, to enable a “definite and final decision” on the loan funding before the end of October.

Juncker said Athens does not now need the money which it previously said was required swiftly to avert a default that would send shivers up the spines of banks, governments needing to recapitalise their financial sectors and overseas economic rivals. When Greek lawmakers last voted through a financial overhaul in the summer, central Athens ground to a standstill as protests degenerated into sometimes violent clashes with riot police firing tear gas. However, this time Juncker is anticipating “rapid legislation and entry into force” of the overall package. – onlinenews