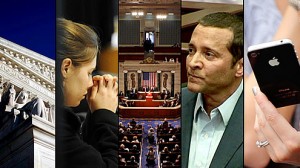 With appeals over the constitutionality of health care reform representing just one potentially explosive topic that could be tackled this year, the U.S. Supreme Court’s new term, which begins Monday, may be “the most interesting one in a century,” a prominent appellate attorney tells CNN. Here is a look at this and other stories that CNN plans to follow this week:

The Supreme Court’s new term begins Monday with plenty of intriguing cases scheduled for the next several months, including those involving TV indecency (whether current policies violate the free speech and due process rights of broadcasters, over profanity and sexual content) and electronic surveillance (whether the government violated a drug suspect’s Fourth Amendment rights by installing a GPS tracking device on his motor vehicle).

And the potential addition in the coming months of cases that the court hasn’t yet scheduled – such as issues related to religious symbols on public land, travel to Cuba, gay marriage and health care reform – could make this an especially big year for the high court. Few doubt that the high court will take at least one appeal relating to the Patient Protection and Affordable Care Act, the signature accomplishment thus far of Barack Obama’s presidency, CNN’s Bill Mears reports. An eventual Supreme Court ruling can be expected by June, right in the thick of a presidential race.

“The Supreme Court term so far is shaping up to be pretty interesting, but it could become absolutely explosive and enthralling, the most interesting one in a century,” Thomas Goldstein, a prominent appellate attorney and founder of Scotusblog.com, told Mears. “If, by chance, the court took up health care, gay marriage, immigration, affirmative action this term, it would be impossible to take your eyes away from the Supreme Court.”

Two years after they were convicted of murder in Italy, American Amanda Knox and her former boyfriend, Raffaele Sollecito, are expected to learn Monday whether their appeals to overturn those convictions have succeeded. Knox and Sollecito were convicted in the 2007 death of Knox’s roommate, British student Meredith Kercher, whose body was found half-naked with her throat slashed in the Perugia home that Knox and Kercher were sharing. Knox and Sollecito, both of whom claim innocence, are expected to make statements on their own behalves in court Monday before a ruling is made. During their appeal, independent forensics experts challenged the DNA evidence that prosecutors had used to link the pair to the crime.

Prosecutors claim Knox slashed Kercher’s throat as Sollecito and a third defendant, Rudy Guede, held her down. Knox was sentenced to 26 years in prison, while Sollecito got 25. Guede was convicted in a separate trial and is serving 16 years. Knox and Sollecito’s defense teams have suggested Guede could have been the sole killer and argue the police investigation was shoddy and incomplete.

With the U.S. government funded only through Tuesday, the U.S. House early this week is expected to approve a measure that would extend funding through November 18. Funding had been set to expire at the end of last week, and a partial government shutdown would have followed. But Congress last week passed a measure extending the funding to this Tuesday. The Senate also passed another measure that would extend funding through November 18, setting the stage for the House to vote on it this week. Short-term funding measures, rather than full fiscal-year budget appropriations, have been necessary in recent years in part because of a sharp partisan divide over government spending issues.

Sentencing for James Arthur Ray, a self-help expert who was convicted of negligent homicide in the deaths of three participants of a 2009 sweat lodge ritual, is scheduled for Thursday in Arizona.

Ray faces up to 12 and a half years in prison.

Three people died and at least 15 others fell ill in October 2009 during a “Spiritual Warrior” retreat – a ceremony modeled after Native American purification rituals – that Ray held at a resort near Sedona. Prosecutors argued that the lodge, which was made of willow trees and branches and covered with tarpaulins and blankets, was heated to a perilously high temperature and that Ray was indifferent to those clearly having trouble. Ray’s lawyers countered that what happened was an accident, not a crime.

Apple is expected to unveil its next-generation iPhone – the iPhone 5 – and potentially make a number of other product announcements at a media event on Tuesday. Sprint Nextel is expected to join AT&T and Verizon Wireless as the only U.S. operators to sell iPhones, according to a report in the The Wall Street Journal. Sprint is expected to offer unlimited data plans for the iPhone – something that AT&T and Verizon do not do. Facebook is expected to launch its long-awaited iPad app at Tuesday’s event, as well as a revamped version of its iPhone app. Selling an old iPhone? Do it now

Economic insights on the way

Investors will be watching to see whether all 17 members of the European Union will ratify the bailout fund that’s seen as Greece’s lifeline to at least temporarily avoid defaulting on its debt, CNN money reports. Greece’s problems weigh heavily on Wall Street’s outlook. “I think you need to watch all this uncertainty to see if it is going to create more uncertainty and lead to less investment and less consumption,” said James Keenan, head of leverage finance at BlackRock. “If it does, you’ll start to see equities sell off more aggressively.”

Federal Reserve Board Chairman Ben Bernanke will discuss the outlook for the economy Tuesday before the Joint Economic Committee of Congress. The Labor Department’s weekly initial data on unemployment claims comes out Thursday, followed Friday by the Labor Department’s August jobs report. – CNN