by Top
in Asia, International News
0 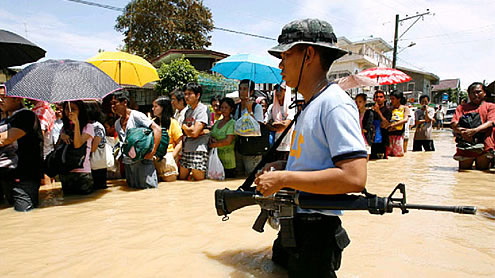 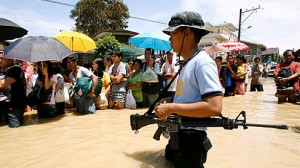 Typhoon Nalgae slammed into the northern Philippines on Saturday, packing gusts up to 195 kilometres per hour and threatening victims still trapped by previous storm floods, officials said. Nalgae made landfall in Luzon at 9:00am (0100 GMT) and was tearing west across the Philippines’ main island with sustained with of 160 kilometres (99.2 miles) per hour, the state weather service said. The storm was tracking roughly the same path as Typhoon Nesat, which ravaged Luzon with huge floods on Tuesday, Science Undersecretary Graciano Yumul said.

“At this point in time, all the flooded areas should be emptied of people. Local officials should implement forced evacuation,” he told a news conference. Officials say more than a million of Luzon’s 48 million people remain trapped in floods unleashed by Nesat, many from farming towns across central Luzon, where rainwater from nearby mountain ranges flush out into Manila Bay. Nesat killed 50 people and left 31 others missing, according to an updated official tally by the government’s National Disaster Risk Reduction and Management Council.

It said some 180,000 people were sheltering at state-run evacuation centres, mostly those displaced by Nesat. Its director Benito Ramos said thousands of rescue workers deployed across Luzon ahead of Nalgae’s landfall, and the island’s sparsely populated northeast coast was evacuated from Friday on orders from President Benigno Aquino. “We’re implementing persuasive evacuation operations,” said Ramos, a retired general, telling AFP: “If I have to handcuff people to remove them from their homes I could be charged with human rights violations.”

There had not yet been any reports of casualties or damage, he said. Ida de la Cruz, a 37-year-old farmer’s wife, was sitting out the disaster on her rooftop after floods engulfed her home and the rest of Pulilan, a town of 70,000 people an hour’s drive north of Manila. “We can’t leave our 15 ducks as most of our income come from the eggs that they lay,” she told AFP while she washed clothes using the murky brown floodwaters that had swamped her farmhouse. Chickens and dogs shared her perch. She said no help had arrived since the floods descended on Wednesday, when their three children were dispatched to her mother’s home. She and her husband were down to five kilogrammes (11 pounds) of rice. Raul Agustin, a provincial disaster official in the area, told ABS-CBN television in an interview flood victims were generally reluctant to leave for fear their homes would be looted.

“When we send out rescue teams to help them, they ask for food instead. Today we gave instructions to convince all those marooned on rooftops to move to evacuation centres.” Nesat dumped the biggest single-day volume of rain on the disaster-weary Philippines this year, and Nalgae was expected to bring just as much over the same areas, it added. The capital, Manila, is on the edge of the new typhoon’s 500-kilometre footprint, though the metropolis was calm under leaden skies on Saturday. Luzon and nearby islands are hit by an average of 20 major storms a year. – Khaleejtimes