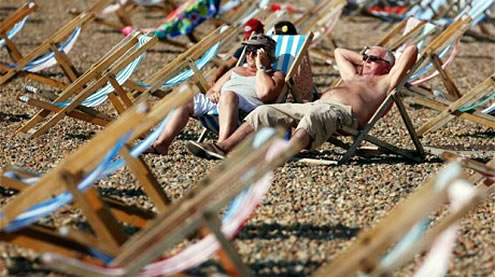 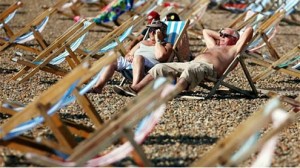 Forecasters are predicting that the current record high for October of 84.9F (29.4C) will be shattered as the autumn heatwave reaches its peak this weekend. They believe they could even top 86F (30C) or higher in some parts of the country. The forecast comes as the country entered its fourth day of an unprecedented Indian summer which has seen it experience temperatures higher than the Bahamas and Hawaii. Eleanor Crompton, Met office forecaster, said: “There is a good chance of records being broken and temperatures could even get as high as 30C (86F).”

Temperatures yesterday reached 84F (29.2C), the hottest for the end of September on record. Meteorologists say they will go even higher, beating the previous record for October that dates back to October 1, 1985, at March in Cambridgeshire. The highest temperatures are expected in London and the East Anglia. But even the north of Scotland will enjoy 73.4F (23C). Stephen Davenport, forecaster for MeteoGroup, said the weather is likely to stay warm until the beginning of next week when it will probably begin to cool. Hotels.com said it had experienced almost a 10-fold rise in searches to top British seaside destinations including Bournemouth and Weston-super-Mare.

The most popular resort was Broadstairs in Kent, with a 275 per cent increase in hotel searches compared with the same time last year. The company said other popular spots included Salcombe in Devon, Skegness in Lincolnshire, Southend in Essex and Portsmouth. The Supermarket giant Tesco predicted the weekend will be a “barbecue bonanza” and has ordered extra stock to cope with the expected demand. It expects to sell 3.5 million sausages in the next three days as well as 550,000 burgers, a million pots of potato salad and coleslaw and 10 million bottles and cans of beer.

The RSPCA has repeated its warning about the dangers of leaving animals in cars, conservatories or caravans during the hot weather after it received 170 reports from people worried about pets in the last week. The charity said this is three times as many calls as during the same week last year. – Telegraph