Seven Dead as Hurricane Irene Churns Up US East Coast 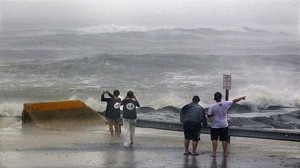 Hurricane Irene continues to pound the U.S. East Coast with heavy rains and strong winds, leaving at least seven people dead in its wake and paralyzing ground and air traffic.
New York started feeling the effects of the hurricane Saturday shortly before midnight, with winds increasing early Sunday.  Forecasters say Irene will move into southern New England in the northeastern U.S. by Sunday afternoon before reaching Canada Sunday night.
Irene blasted ashore in North Carolina early Saturday, flooding streets and toppling trees with sustained winds of 140 kilometer per hour.  The storm later moved into the Washington area, which continues to be hit with strong winds, heavy rain, localized flooding and falling trees.
More than 1.5 million homes and businesses are without power in the eastern U.S, with at least seven people killed.  Tens of millions of people are in the path of the storm, which is passing through some of the country’s most densely populated areas, with winds of 130 kilometers per hour.  Tornadoes spurned by the hurrican destroyed homes in Delaware and Virginia.
The U.S. National Hurricane Center said the massive storm system is expected to continue moving north-northeast at about 24 kilometers per hour.
American Red Cross spokesperson Kate Meier is in North Carolina, and told VOA that even away from the coast, conditions are worrying. “When I was driving to the shelter, a tree branch hit the windshield of my car, which was terrifying. Fortunately everything was okay, and that’s what we’re seeing here is some downed branches, but hopefully not a lot of damage in this immediate area. But knowing that I’m 150 miles [241 kilometers] inland and that it’s that much worse on the coast is pretty frightening,” said Meier.
Along with organizations like the Red Cross, federal, state and local authorities have mobilized resources to confront the storm, which is on track to move up the U.S. East Coast. Homeland Security Secretary Janet Napolitano said officials anticipate heavy rain, flooding and significant power outages throughout the region. There also is a threat of tornadoes. “Irene remains a large and dangerous storm. People need to take it seriously. People need to be prepared,” she said. Top emergency coordinators in Washington also got a visit Saturday from President Barack Obama. “This is still obviously going to be a touch-and-go situation for a lot of communities,” said the president. Already there have been large-scale evacuations and thousands of flight cancellations.
In New York City, the entire public transit system, including subway trains and buses, shut down Saturday for the first time ever. Red Cross spokesman Steve Bayer is on New York’s Long Island, where he said the organization is prepared with shelters that can care for thousands of people. “We have registered nurses, and in some cases, even doctors. And we have a lot of mental health professionals that come to us, volunteer their time to work in our shelters, because it is a pretty heavy load for people who have left their house. They don’t know where their animals are,” said Bayer. The Red Cross said its response to Irene could be one of the largest it has undertaken in recent memory. The organization is responding in more than a dozen states, and said it could take weeks, even months, to be able to fully address the disaster. National Hurricane Center forecaster Todd Kimberlain said the problem with Irene is its path. “It’s dangerous in the sense that this part of the country is not used to receiving many hurricane strikes. In fact, New England has not received a hurricane strike in 20 years. [In] the mid-Atlantic states, the last hurricane was Isabel in 2003, so this is a significant weather system for this part of the country,” he said.
Kimberlain also said Irene is not the strongest hurricane, and nowhere close to 2005’s devastating Hurricane Katrina, but he says it is still capable of causing damage. – voanews
Previous Post