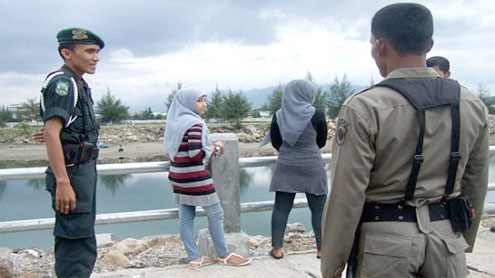 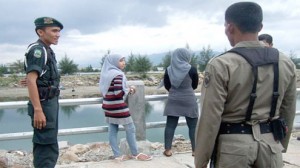 Islamic police in the Indonesian province of Aceh have forced two women to have their marriage annulled and sign an agreement to separate.The women had been legally married for a few months after one of them passed as a man in front of an Islamic cleric who presided over their wedding.But suspicious neighbours confronted the couple and reported them to police.The two women are now back with their families, forcibly separated and under surveillance by the Islamic police.

The local Sharia police chief told them Islam said they must be beheaded and burned for what they had done.But Aceh, the only province in Indonesia that is allowed to implement Sharia law, has yet to adopt any provisions dealing with gay and lesbian people.The provincial parliament passed Islamic laws authorising the stoning to death of adulterers and the caning of homosexuals in 2009, but the governor has refused to sign it.Homosexuality is frowned upon but legal in Indonesia.Activists have blamed Aceh’s Sharia laws for encouraging vigilantism and intolerance, and say they violate the Indonesian constitution. – BBC