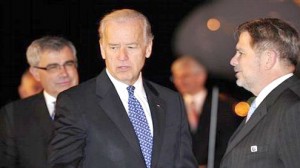 U.S. Vice President Joe Biden is beginning a visit to Japan, the last stop on his Asia trip, which has already taken him to China and Mongolia.Biden will meet with Japan’s Prime Minister Naoto Kan Tuesday for talks on cooperation toward rebuilding the areas of Japan that were hit by a devastating earthquake and tsunami in March. Later Tuesday, he is scheduled to visit Sendai, a major city damaged by the twin disasters and give a speech on reconstruction at the local airport where U.S. forces conducted relief work.On Wednesday, Biden is scheduled to visit U.S. Embassy officials in Tokyo and a U.S. Air force base in the area.

Japan’s Kyodo news agency reports that Biden arrived in Tokyo Monday night from Mongolia. The U.S. vice president had stopped for a day in Mongolia’s capital Ulaanbataar for talks with President Tsakhia Elbegdorj, Prime Minister Sukhbaatar Batbold and other officials on closer economic and defense cooperation.He thanked the country for its contributions to military operations in Iraq and Afghanistan as well as other peace-keeping operations.Biden began his Asian tour last Wednesday in China. During the five-day visit, he met with President Hu Jintao, Premier Wen Jiabao and other top officials for talks that focused on economic issues.

He praised China’s economic growth, but also expressed confidence in the future of the U.S. economy, by far the world’s largest.Biden’s visit comes less than two weeks after an unprecedented U.S. credit downgrade – a move that sparked global concerns about the safety of dollar assets.The United States, China and Japan are parties in six-nation talks on North Korea’s nuclear disarmament. Kyodo quotes Japanese officials as saying North Korea, Libya and other international topics are likely to be discussed during Biden’s three-day visit to Japan. – Voanews