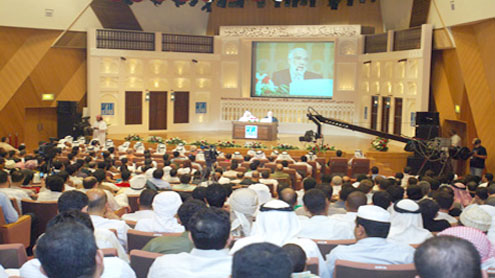 ”Talking about the UAE contestants, Al Suwaidi said five memorisers were nominated for the award eight months back. “Following eight months of preparation, three quit, and then Al Mansouri has been nominated for the Dubai award and the others for another international award,” he said, adding that Al Mansouri, who participated in three Quran contests abroad, will represent the country in Saudi Arabia.

Of the distinguished participants was Yemeni contestant Anas Saeed Mohammed Saeed, who has managed to answer all three questions in the night shift, but was warned twice in the morning shift.Expertly articulating letters and sounds, and perfectly reciting and observing the rulings of reading the Quran, Saeed has far excelled his competitors in the earlier sessions.The 19-year-old high school student said he is getting ready to complete his university studies.Illustrating his five-year journey with the Holy Quran, Saeed said he started memorising the Quran at the age of 13, and finished at 18. “I started memorising with one page per day, then moved to two pages and finally two-and-a-half pages.”

Though Saeed started memorising the Quran at home, he moved to the masjid and learnt the Quran by heart on the guidance  of Sheikh Mohammed Adam, and then Sheikh Najuib Mohammed Abdullah. “My mother has also helped me so much by revising what I have memorised, and so has my father sometimes.”Saeed was the topper in a local competition in Taez city and then won the national contest.

“Participation in a Quran contest, particularly the Dubai International Holy Quran Award which I came to know about 10 years back, is an honour for us all.”Talking about the effect of the holy book on him, Saeed said the Quran has influenced all his life and changed it for better.“Memorising the Holy Quran has helped me behave well and respect others,” he said, wishing to be a teacher of Quran recitation and explanation. – Khaleejnews