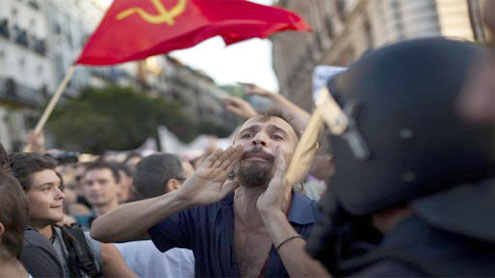 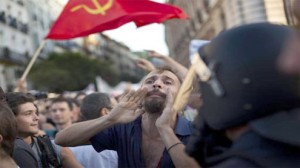 MADRID: A chemistry student working as a volunteer for the pope’s visit to Madrid was arrested on suspicion of planning a gas attack targeting protesters opposed to the pontiff’s stay, officials said Wednesday.

Pope Benedict XVI is due to arrive Thursday for a nearly four-day visit to celebrate World Youth Day, and thousands of protesters railing against his visit staged their march Wednesday night to Madrid’s central Sol plaza where they have held months of demonstrations against Spanish politicians and the government’s anti-austerity policies.

A police official said the suspect arrested in Madrid Tuesday is a 24-year-old Mexican student specializing in organic chemistry. She would not say whether investigators believe the man was actually capable of carrying out a gas attack, and did not know if he actually had chemicals that could have been used to assault the protesters.The detainee was identified by the Mexican Embassy in Madrid as Jose Perez Bautista, which said he was from Puebla state, near Mexico City.He was arrested at a Madrid convention center where the hundreds of thousands of pilgrims coming to town for the papal visit are supposed to pick up their accreditation, the police official said on condition of anonymity in line with the department’s rules.

An official with the pope visit’s organizing committee said the Mexican was a volunteer helping to deal with the massive flow of people flooding Madrid. She would not give her name, citing the church-run committee’s policy.A total of 30,000 people from around the world are taking part in that organizing effort, 10,000 police are providing security in Madrid and organizers say they expect more than 1 million young pilgrims for World Youth Day, which started Tuesday and runs through Sunday.

The march he allegedly wanted to disrupt happened relatively peacefully, with some shouting between protesters and pope supporters. But it ended with police ousting protesters from the plaza, with at least one arrest of a demonstrator. Riot police monitored the plaza after the demonstrators were cleared out.Police have 72 hours from the time of the arrest to bring the detainee before a judge at the National Court for questioning or to release him. A court official said he would appear before the judge Thursday at the earliest.The official — speaking on condition of anonymity in line with court policy — said the detainee had been making threats over the Internet against people in Spain opposed to the pope’s visit, and police who’d been monitoring his online activity ultimately decided to arrest him as the visit approached.

Police said in a statement released Tuesday night that officers who searched the detainee’s apartment in a wealthy district of Madrid seized an external hard-drive and two notebooks with chemical equations that had nothing to do with his studies.It said he tried to recruit people via the Internet to help him, and that a computer allegedly used for this purpose was among objects seized by police.The man had planned to attack anti-Pope protesters with “suffocating gases” and other chemicals, the statement said. But it did not mention police having confiscated chemicals that could be used in an attack.

Mexican Embassy spokesman Bernardo Graue said consular officials had visited Perez Bautista in prison and described him as “relaxed” and in good physical condition as he waits to go before a judge. The Mexican officials did not ask him if he had in fact planned a gas attack, because interrogating him is up to Spanish authorities, Graue said.Without knowing what chemicals and delivery system the man may have had, it is impossible to know what harm he could have caused on protesters marching in open air through the streets of Madrid, as will happen Wednesday evening, said Magnus Ranstorp, a terrorism expert at the Swedish National Defence College in Stockholm.

The suspect was in Madrid studying with Spain’s top government research body, the Spanish National Research Council, and his office there was searched, the police statement said. The council confirmed the arrest but gave no immediate details on the Mexican.Mexico’s Autonomous University of Puebla confirmed that a man with the same name had completed an undergraduate degree in chemistry in 2009 and had expressed interest in doing graduate work in Spain.”Both the name and the academic background match,” said Rafael Hernandez Oropeza, the university’s director of international relations. He said Perez Bautista had an 8.6 grade average out of 10, “which is pretty high.”

Gloria Leon Tello, the academic director of the university’s school of chemistry, said Perez Bautista was a quiet, well-mannered, hardworking student. She had contact with him as an administrator, but did not have him in class.”He was a very dedicated student, calm, very well-mannered,” said Leon Tello, who said his age roughly matched that of the Madrid suspect. “He had very deep values … like discipline, responsibility.” Leon Tello said she did not hear him express political or religious views.Mexico has some history of conservative religious extremism.

In 1926, tensions over Mexico’s harsh anti-clerical laws broke into armed conflict between the government and Catholic rebels in the bloody, three-year Cristero War in which tens of thousands died.In 1928, a young conservative Catholic activist, Jose de Leon Toral, assassinated President-elect Alvaro Obregon.In the 1960s and 1970s a number of conservative Catholic youth groups grew up at universities in Mexico, including Puebla, and sometimes scuffled with left-wing student activists of the time.Church organizers say the papal visit will cost about euro50 million ($72 million). Protesters claim the government is essentially spending taxpayers’ money on the visit by granting tax breaks to corporate sponsors and perks such as discount subway and bus tickets for pilgrims. – Yahoonews