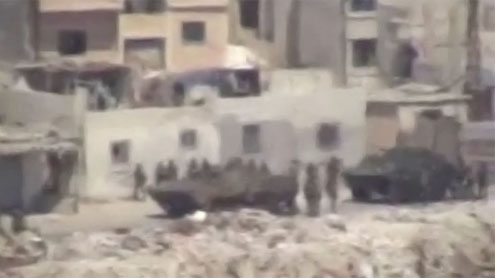 AMMAN: Syrian troops raided houses in a Sunni district of the besieged port of Latakia on Wednesday, residents said, arresting hundreds of people and taking them to a stadium after a four-day tank assault to crush protests against President Bashar Assad.Assad forces attacked Al-Raml Al-Filistini (Palestinian sand), named after a refugee camp built in the 1950s, at the weekend, as part of a campaign to crush a five-month uprising, which has intensified against major urban centers of protest since the start of Ramadan on Aug. 1.

“Shelling and the sound of tank machine guns are subdued today. They are bussing hundreds to the Sports City from Al-Raml. People who are picked up randomly from elsewhere in Latakia are also being taken there,” said a resident, referring to a complex that was venue for the Mediterranean Games in the 1980s.”Tanks are continuing to deploy, they are now in the main Thawra (revolution) Street,” said the resident, a university student who did not want to be identified.A diplomat in the Syrian capital said: “The reports about detention conditions and torture are increasingly alarming. Assad is backing himself more into a corner by using more and more violence and turning more Syrians against him.”

Violence elsewhere in the country left four people dead. In a village in Idlib province near the border with Turkey, security forces shot dead a man standing on his balcony, the Britain-based Syrian Observatory for Human Rights said.In Homs, a sniper shot dead a civilian in its Armenian neighborhood, while security forces conducting raids in the city of central Syria shot dead two men and wounded three others, the Observatory added.The United Nations on Wednesday said it had withdrawn all nonessential staff from Syria. “We have pulled more than 20 personnel out of Syria, all of whom are nonessential United Nations staff,” said the office of UN Lebanon representative Michael Williams.

The UN Security Council on Thursday will hold a special session on Syria, with the participation of the UN’s Human Rights Commissioner Navi Pillay.The Tunisian government recalled its ambassador in Syria for “consultations,” a Foreign Ministry source said in Tunis.”Given the dangerous situation in Syria, the Tunisian government has decided to recall its ambassador in Damascus for consultations,” the official TAP news agency quoted a ministry source as saying.Turkey’s Prime Minister Recep Tayyip Erdogan compared the situation in Syria with that in Libya, where the opposition have been fighting forces loyal to Muammar Qaddafi since February.

“We have done our best on Libya, but haven’t been able to generate any results. So it’s an international issue now. Qaddafi could not meet our expectations, and the outcome was obvious,” Erdogan told reporters.”Now the same situation is going on in Syria. I’ve sent my foreign minister, and personally got in touch many times, the last of them three days ago on the phone. In spite of all this, civilians are still getting killed.”Russia, however, said it would maintain arms sales to Syria despite US pressure because the United Nations had failed to impose sanctions against Assad’s regime.Anatoly Isaikin, director of Rosoboronexport, Russia’s state weapons exporter, said his organization was under contract to provide Syria with arms for as long as such sales remained legal under international law. – Arabnews

India: Mass Support For ‘Fast To The Death’

Strauss promises no let-up for India

Strauss promises no let-up for India