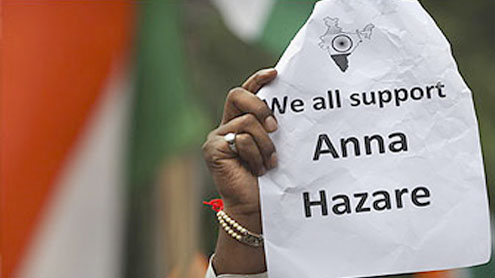 An Indian anti-corruption activist refused to leave jail on Tuesday after being held in custody for several hours to prevent him starting a high-profile hunger strike in New Delhi.Veteran campaigner Anna Hazare, 74, was released by authorities but said he would only walk out of prison if his demands to be allowed to hold a public “fast unto death” in a city park were met, officials told AFP.

About 1,400 Hazare supporters were set free after being held during the day inside a sports stadium in a police operation that was widely criticised as an attempt to quell dissent.Corruption has become a key issue of public discontent in India, and Hazare has emerged as a prominent national figure for his campaign to demand that a new anti-graft law currently before parliament is strengthened.

“Will this movement be stopped by my arrest? No, not at all. Do not let it happen,” Hazare said in a pre-recorded message on Tuesday morning predicting the police’s action.“This fight for change which has begun, we will take it forward on the path of non-violence as long as there is life in the body.”Home Minister P. Chidambaram denied the government was quashing opposition voices, saying protest organisers refused to guarantee to obey police orders that the rally would be limited to 5,000 people and only last three days.“This government is not against peaceful protest,” he stressed.Further demonstrations erupted in Chennai, Hazare’s home state of Maharashtra and elsewhere after Hazare, a devotee of Indian independence hero Mahatma Gandhi, was taken to the capital’s Tihar jail.

“We have issued his release warrant and it has been sent to the jail authorities,” Delhi police spokesman Rajan Bhagat told AFP on Tuesday evening.But officials who declined to be named confirmed Hazare was refusing to leave as wild celebrations erupted among his supporters outside the prison gates.Corruption has rocketed up the agenda in fast-developing India after a series of scandals, notably a telecom licence scam that is thought to have cost the country up to $39 billion in lost revenue.The Bharatiya Janata Party (BJP), which leads the opposition, accused authorities of an “absolutely undemocratic” act in arresting Hazare as protests in the national parliament forced business to be adjourned for the day.

“It’s a bizarre and thoughtless act on the part of the government,” party spokesman Rajiv Pratap Rudy told AFP, describing the police’s approach as an “instigation to aggression”.Many observers believe the crackdown reflected concern Hazare may become a figurehead for a broader protest movement against Prime Minister Manmohan Singh’s government, which is also grappling with an economic slowdown and high inflation.Zoya Hassan, a politics professor at Delhi’s Jawaharlal Nehru University, told AFP that Hazare’s detention was a “violation of basic liberties”.“It’s a bumpy road ahead,” she said. “The civil society activists have significant middle-class support and they have ample media support. The detention will cause a lot of unrest.”

In June, police halted another anti-corruption hunger strike in Delhi when officers broke up a protest by yoga guru Swami Ramdev that had attracted national headlines.In April, Hazare staged a 98-hour hunger strike that pushed the Congress-led government into allowing him and his supporters to help draft the new anti-corruption law, called the “Lokpal” bill.The bill, since introduced in parliament, would create a new ombudsman tasked with investigating and prosecuting politicians and bureaucrats, but Hazare wants the prime minister and higher judiciary to come under scrutiny.Arguing that his recommendations had been ignored, Hazare had planned to begin a second hunger strike on Tuesday.Hazare, a life-long bachelor who wears simple, white home-spun cotton, is a social conservative who dreams of an India centred around self-sufficient villages — much like his hero Gandhi. – Khaleejnews