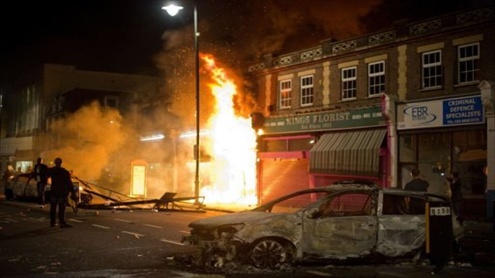 Police battled to restore order Sunday as rioters went on the rampage in north London, torching police cars, vans, a bus and buildings amid widespread looting. The unrest, which broke out in Tottenham just before sunset Saturday, followed a protest over the fatal shooting of a man during an apparent exchange of gunfire with police officers. The patrol cars and the double-decker bus were set ablaze as hundreds ran amok outside the police station on Tottenham High Road. There was concern that the unrest was being fueled by inflammatory posts on Twitter.

Under a hail of missiles, riot officers and mounted police battled to regain control of the streets as fire crews rushed to tackle the burning building. Rioters kicked in windows on the High Road as shops were looted, with people seen pushing away shopping trolleys full of stolen goods. The trouble spread to surrounding residential streets, where vans were also torched.

Central London has seen student and trade union protests turn ugly in recent months but this outbreak of rioting is the worst seen in years in the suburbs. The unrest followed a peaceful march to the police station in Tottenham in protest over the shooting dead of a minicab passenger by police on Thursday in an apparent exchange of gunfire. Mark Duggan, 29, a father-of-four, died at the scene.

An officer may have had a lucky escape in the incident — a police radio was found to have a bullet lodged in it. Police said that two patrol cars were torched as they were pelted with bottles, one of them being pushed into the middle of the High Road before being set ablaze. Riot squad officers were then deployed to try to keep people back from the police station before the bus was torched and the shop set alight.

Local resident David Akinsanya told BBC television he was feeling “unsafe”.”It’s really bad,” he said. “There seems to be a lot of anger in Tottenham tonight.” Tottenham is an ethnically-diverse urban area best known for its English Premier League football club Tottenham Hotspur. Spurs beat Spain’s Athletic Bilbao 2-1 in a friendly earlier in the evening.

One eyewitness said very few people around the High Road were obvious fans, with most not wearing football colours and masking their identity with hoods.

The estate is notorious in Britain for the 1985 riot which saw Police Constable Keith Blakelock hacked to death in some of the worst urban rioting in Britain in the past 30 years.

David Lammy, the member of parliament for Tottenham, appealed for calm Sunday.

“Those who remember the destructive conflicts of the past will be determined not to go back to them,” he said.

“We already have one grieving family in our community and further violence will not heal that pain. True justice can only follow a thorough investigation of the facts.

“The Tottenham community and Mark Duggan’s family and friends need to understand what happened on Thursday evening when Mark lost his life. To understand those facts, we must have calm.”

The Independent Police Complaints Commission (IPCC), which investigates all police shootings — regular British police officers do not carry guns — said that specialist firearms officers stopped a minicab on Thursday to carry out a pre-planned arrest.

They were accompanied by officers from Trident, the unit focused on tackling gun crime in the black community.

“Shots were fired and a 29-year-old man, who was a passenger in the cab, died at the scene,” the IPCC said.

It is believed that a firearms officer fired two shots. A non-police issue handgun was also recovered at the scene.

“An officer’s radio which appears to have a bullet lodged in it has also been recovered.”

“Fatal shootings by the police are extremely rare and understandably raise significant community concerns,” she said.

“I fully recognise how distressing and disturbing this must be for the family and the local community.”

A spokesman for London Mayor Boris Johnson said: “Where there are real concerns in the community it is right that there is a proper investigation.

“The incident which led to the violent scenes in Tottenham this evening are the subject of an IPCC inquiry.

“Violence and destruction of property will do nothing to facilitate this investigation and we urge those involved to respect the rule of law.” – Yahoo News