Tornado fears as US south hit by deadly spring storms 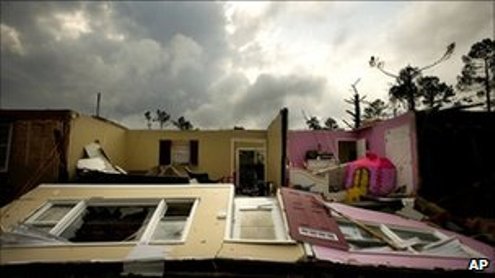 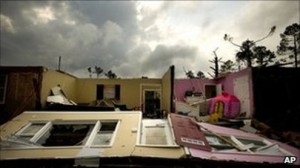 Three days of severe spring storms have killed 24 people in the southern US, with the death toll expected to rise.

The latest storms saw four deaths reported in North Carolina, and the state governor warned of more to come.

Storm chasers have tracked tornadoes across the south, and Washington DC, Virginia and Maryland were put under tornado watch.

Much of the damage in the south was attributed to high winds, with Alabama and Arkansas among the worst-hit.

Trees and power lines have been felled by the storms, which have torn roofs off houses and scattered tractor-trailers across roads.

Alabama and Arkansas each reported seven deaths, with two in Oklahoma, one in Mississippi and one in storm-related wildfires in Texas.

The governor of Alabama visited several of the devastated areas on Saturday, and declared the entire state a disaster area.

Details were not immediately available of the deaths in North Carolina, but Governor Beverly Perdue said more information would be made public on Sunday.

Sixty-two tornadoes were spotted in the state and deaths were recorded in four of the state’s counties, she said.

A mechanic at a tyre shop in the state capital, Raleigh, said he had taken shelter in his truck while co-workers squeezed into an interior room when the storm hit.

“It was one hell of a storm,” Bryan Jackson told Reuters news agency.

“I started to see the roof vibrate and then the roof separated and it was gone.”