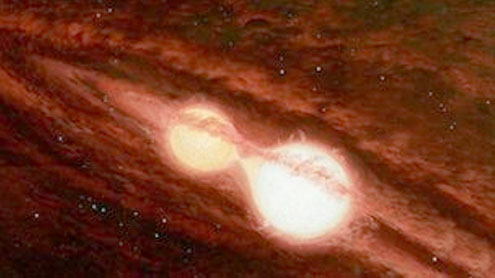 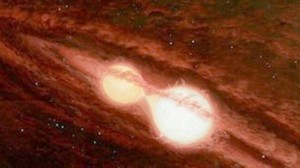 The graceful dance between three stars seen by the Kepler telescope has drawn the attention of astronomers because it is not accompanied by a song.Most stars are known to generate great booming sounds in their interiors, and Kepler can spot the resulting change in the light that they emit.However, astronomers reporting in Science say a red giant they have spotted is unexpectedly quiet.HD181068A is orbited by two smaller, red dwarf stars that orbit each other.The study of the sounds within stars is known as astroseismology, and a separate report in Science details the findings of more than 500 stars whose deep rumblings Kepler has measured.As convection processes within stars move masses of material up from the core, great pressure waves – in essence, sound waves of very low frequency – are created.As the gases are compressed and rarefied, temperature changes lead to changes in the light that escapes the stars.

The sounds within the stars, and the clues they give into the stars’ makeup, can be inferred from these small changes in the “light curves” that telescopes such as Kepler measure.But HD181068 is an unusual case – firstly because it is a “triply eclipsing” system. From Kepler’s viewpoint, the two smaller binary stars pass in front of one another as they orbit each other, and they in turn pass in front of the red giant.Just what is going on in the system can be worked out from measuring the tiny amounts of light that are blocked by each star at each stage of the trio’s waltz.It is not the first triply eclipsing system that Kepler has spotted; that honour goes to KOI 126, also reported in Science, in February.But the red giant’s silence has confounded the new study’s lead author Aliz Derekas, of Eotvos University in Hungary.”This red giant star should pulsate,” she told BBC News.

“We now know all red giants show some oscillations – the surface of the star should show some waves that should be in the light curve. We can estimate the period of these oscillations, and this red giant doesn’t show that period.”The best guess for the moment is that the gravitational forces at work between the three stars could serve to dampen the oscillations at HD181068’s surface.That is because the two smaller stars orbit each other in 0.9 days, whereas the expected period of oscillations from the red giant’s rumblings is almost exactly half that.It may be that the binary pair stops the oscillations on the red giant by tugging on the star’s surface at just the right times.Mike Montgomery, an astronomer at the University of Texas at Austin, said another force may be at work.”When you have stars in a binary or triple system, and one of them burns all its hydrogen and becomes a red giant, if it’s close enough it can start to dump some of its material onto that other star,” he explained to BBC News.”This is just circumstantial evidence, but maybe its internal structure isn’t what it would have been if it were a single star, and that’s somehow affecting its ability to pulsate.”Either way, Kepler’s prolific rate of discovery means that further examples of systems of this sort may be just around the corner.Dr Montgomery said: “These things are not as uncommon as you might think. We’ll probably discover more of these systems and we’ll be able in a couple of years to be sure about this sort of diagnosis.” – BBC