Kate and William: A ‘So British’ wedding menu 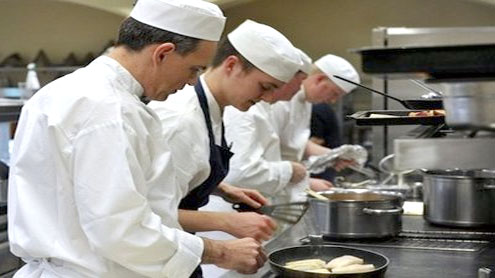 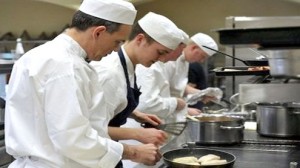 LONDON: Steak with whisky? Lamb and mint sauce? Banana pudding? The menu for the wedding of Prince William and Kate Middleton is a closely guarded state secret, but one thing is assured: it will be “so British.””We wouldn’t really go into any of the specifics for the big day but we always concentrate on showing off the best of British produce – so your bets are safe on that,” said Mark Flanagan, chief chef for Queen Elizabeth II.Over 300 guests have been invited to the meal on the evening of April 29, hours after the couple wed at London’s Westminster Abbey.”I think they’ll have as the first course some sort of salad with a terrine,” Darren McGrady, the personal chef to Princess Diana, Prince William and Prince Harry until Diana’s death in 1997, told AFP.”I know that one of the most popular is the Gleneagles pate, which is like a terrine of smoked trout, smoked salmon and smoked mackerel pate”, explained McGrady, who also goes by nickname “The Royal Chef”.”For the entree, I would see Gaelic steaks, tenderloin steaks in a whisky mushroom sauce, or an organic lamb from Highgrove”, the farm of Prince Charles, father of William.

In 1986, a “rack of lamb” (with mint sauce) was cooked up for the wedding of Prince Andrew and Sarah Ferguson.McGrady, who has also been personal chef to the queen, speculated on “a banana flan, a sort of sugar paste and creme patissiere inside with sliced bananas and apricot jelly” for dessert.”When I cooked for Prince William, his favourite dessert was banana flan,” recalled McGrady. “Whenever he came over at weekends, he would ask for banana flan. The queen likes it, and he still does.”The unmissable “fruitcake” will then follow.Ordered from famous patissiere Fiona Cairns, who counts ex-Beatle Paul McCartney as a customer, the cake will be adorned by 16 flowers symbolizing, among other things, happiness (rose), tenderness (lily) and marriage (ivy) at the request of Kate Middleton.A true work of art, the cake will be revealed at the reception, which will take place in the middle of the day in Buckingham Palace’s majestic “Picture Gallery”, under the gaze of Rembrandt, Poussin and Rubens paintings.Next to the wedding cake will be a more humble chocolate cake favoured by Prince William, made using the famous McVitie’s “tea biscuits”.

“When Prince William was a young boy he would have it for tea and really enjoyed it”, explained Paul Courtney, the pastry chef for McVitie’s.Steaks, fruitcake, tea biscuits: the meal will be “as British as possible”, admitted Darren McGrady.However, as is the tradition, the menu will be written entirely in French.”All the menus are in French, with no translation at all, even for the coming state visit of President Obama,” said the chef, author of “Eating Royally”.”The queen speaks fluent French, it dates back to the days where the whole kitchen was French,” he added.The couple, who want to present a “modern” image, gave in to this custom, but nonetheless instigated a mini-revolution in the palace by skipping the ritual “wedding breakfast,” a sit-down meal traditionally eaten after the service.

Kate and William will only have a buffet, as is usual at most British weddings. However, this also reflects the difficulty of seating 600 guests.In contrast, only 120 guests were invited to the “wedding breakfast” of Prince Charles and Princess Diana 30 years ago.The lucky few were treated to “brill in lobster sauce, chicken breasts garnished with lamb mousse and strawberries and Cornish cream all served on golden plates”.Despite the downgraded menu, guests are unlikely to complain with the canapes, to be served in the palace’s 19 opulent “State Rooms”, far exceeding everyday tastes.On the menu will be Hugot & Clement truffle champagne (a 1687 recipe), beet blini, quail eggs with salt and celery and the “very popular croque-monsieur”, suggested Darren McGrady.The whole day takes months of organising. “We start planning generally for events as far out as six months”, explained Edward Griffiths, deputy master of the Royal Household.Each year, the royal kitchens prepare around 550 meals for 50,000 guests. For “D-Day”, 21 people will be at work in the kitchens.