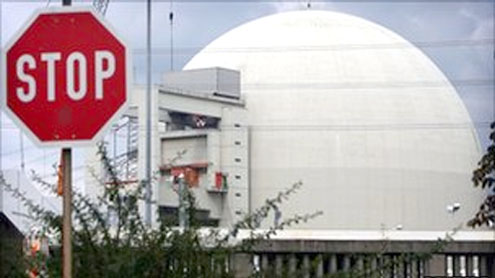 Germany has temporarily shut down seven of its nuclear reactors while it reconsiders its nuclear strategy.Chancellor Angela Merkel said that all reactors operational before 1980 would be taken offline, and safety checks carried out on the remaining plants.The move comes after concerns about radiation leaks at a Japanese plant after last Friday’s earthquake.The EU has also reached agreement on “stress tests” of all European nuclear facilities.”We want to look at the risk and safety issues in the light of events in Japan,” the European energy commissioner Guenther Oettinger said.Chancellor Merkel also pointed to the safety concerns behind the German move.”In light of the situation, we will carry out a safety check of all nuclear plants,” she said.

“Those nuclear power plants which began operation before 1980 will be provisionally shut down for the duration of the moratorium. They will be out of service.”Safety is the priority. Those are the criteria by which we acted today.”All safety questions would be answered by 15 June, she said.Last year, Germany decided to extend the life of its 17 nuclear power plants by 12 years, but that decision was suspended for three months on Monday.The government had faced growing pressure for the extension to be scrapped.More than a quarter of all German electricity comes from nuclear power.The Swiss government has also suspended decisions on its nuclear programme.Concerns are growing about radiation leaks at a nuclear plant in Japan that has been hit by a third explosion in four days following last week’s earthquake and resulting tsunami.The blast occurred at reactor 2 at the Fukushima Daiichi plant – 250km (155 miles) north-east of Tokyo – which engineers had been trying to stabilise after two other reactors exploded – BBC