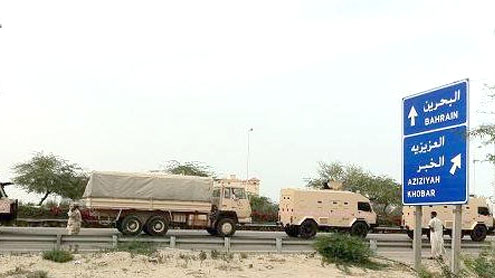 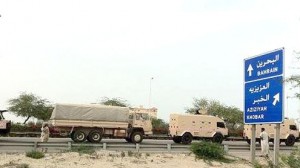 CAIRO: Troops crossed from Saudi Arabia into Bahrain on Monday to help quell protests that sealed off the capital’s financial sector there, a move Bahraini opposition groups denounced as an “occupation,” while pro-government legislators urged the king to impose martial law.An unnamed Saudi official told news agency AFP that military vehicles carrying more than 1,000 Saudi troops had crossed the bridge linking Saudi Arabia to the tiny island kingdom. His account was corroborated by witnesses in Bahrain, who said they saw more than 100 trucks crossing the bridge, but there was still no official confirmation from the Bahraini government.A military-run clampdown would risk further polarizing the strategic island kingdom — home to the US Navy’s 5th Fleet — and send a chill through the many international banking and financial companies that use Bahrain as their Gulf hub.Associated Press reported that a Saudi security official said the troops came from a special unit of the six-nation Gulf Cooperation Council, which includes Saudi Arabia and Bahrain, and that they were there to protect critical buildings and installation such as oil facilities.The opposition statement said it considered the arrival of any soldier or military vehicle “an overt occupation of the kingdom of Bahrain and a conspiracy against the unarmed people of Bahrain”.The pro-government lawmakers, called the Independent Bloc, asked the government to enforce martial law for three months to insure public safety and national stability threatened by what it called “extremist” elements, the state-supported Bahrain News Agency reported.Anti-government protesters remained in the streets of Manama, the capital, on Monday, a day after thousands clashed with security forces in the worst day of confrontation since demonstrations began a month ago. The protests are part of the regional turmoil against autocracy but are fed in Bahrain by tensions between the majority Shiite population and the Sunni royal family and elite.The demonstrators on Sunday effectively shut down the roads leading to the capital’s financial sector and held rallies at the main campus of the university as well. It was the most serious challenge to the royal family since the beginning of the protests, which have caused deep concern in Saudi Arabia, which has a restive Shiite minority in its eastern, oil-producing region.

Witnesses said the police used tear gas and fired on the protesters with rubber bullets.”This was a very, very big day,” Mohammad al-Maskati, president of the Bahrain Youth Society for Human Rights, said by telephone from Pearl Square, the epicentre of protests in central Manama. “Now the protesters control these streets. There are walls of rubble keeping out the police and armed groups. People say they will not sleep tonight.”The latest protests occurred a day after US defence secretary Robert Gates stopped in Bahrain and warned the Khalifa family, which has ruled Bahrain for two centuries, that it must go beyond the “baby steps” of reform to meet the economic and political demands sweeping much of the Arab world. Gates said he told the king and crown prince that change “could be led or it could be imposed”.At the same time, Bahrain’s leadership is under intense pressure from other Gulf neighbours, particularly powerful Saudi Arabia, not to give ground.

“We want a new constitution, fair and free elections and a government elected directly by the people,” Mohammad Mattar, an engineer and member of Bahrain’s Waad pro-reform movement, said by telephone. “These are not sectarian demands, but political ones. We want a constitutional monarchy, a clear relationship between the ruling family and society. But the security forces are trying to create a sectarian divide.”Bahrain’s crown prince, Sheik Salman bin Hamad al-Khalifa, meanwhile, renewed a call for national dialogue on Sunday, promising that the talks would address proposals to increase the power of Parliament, Reuters reported. “We have worked actively to establish contacts to learn the views of various sides,” he said in a statement that was read on Bahrain TV, “which shows our commitment to a comprehensive and inclusive national dialogue – TOI