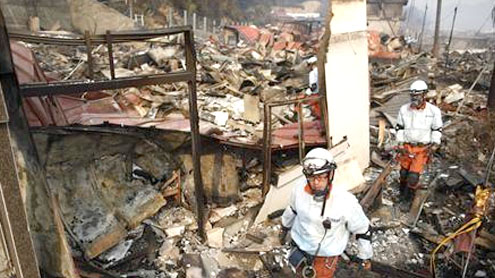 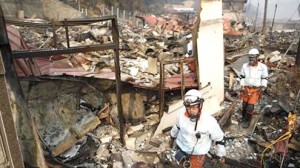 Japan warned radioactive levels had become “significantly” higher around a quake-stricken nuclear power plant on Tuesday after explosions at two reactors, and the French embassy said a low-level radioactive wind could reach Tokyo within hours.Prime Minister Naoto Kan urged people within 30 km (18 miles) of the facility north of Tokyo to remain indoors, underscoring the dramatic escalation of Japan’s nuclear crisis, the world’s most serious since the Chernobyl disaster in Ukraine in 1986.As concern about the crippling economic impact of the nuclear and earthquake disasters mounted, Japanese stocks plunged more than 14 percent – heading for their biggest drop since 1987 — compounding a slide of 7.6 percent the day before.

The two-day fall has wiped $720 billion off the market.In a sign of mounting fears about the risk of radiation, neighboring China said it was strengthening monitoring and Air China said it had canceled flights to Tokyo.Several embassies advised staff and citizens to leave affected areas. Tourists cut short vacations and multinational companies either urged staff to leave or said they were considering plans to move outside the city.But many Japanese were cancelling trips and staying put, saying now is not the time to leave home.”There has been a fire at the No. 4 reactor and radiation levels in the surrounding area have heightened significantly. The possibility of further radioactive leakage is heightening,” a grim-faced Kan said in an address to the nation.”We are making every effort to prevent the leak from spreading.I know that people are very worried but I would like to ask you to act calmly.

“As concerns rose over the nuclear accident, Japanese media became more critical of Kan’s handling of the disaster and criticized the government and plant operator TEPCO for their failure to provide enough information on the incident.The French Embassy in Tokyo warned in an 0100 GMT advisory that a low level of radioactive wind could reach the capital — 240 km (150 miles) south of the plant — in about 10 hours.Winds over the facility were blowing slowly in a southwesterly direction that includes Tokyo but will shift westerly later on Tuesday, a weather official said.Kyodo news agency said radiation levels nine times normal levels had been briefly detected in Kanagawa near Tokyo, but it quotes the metropolitan government that only “minute levels” were found in the capital itself.”Very acute radiation, like that which happened in Chernobyl and to the Japanese workers at the nuclear power station, is unlikely for the population,” said Lam Ching-wan, a chemical pathologist at the University of Hong Kong.But the blasts could expose the population to longer-term exposure to radiation, which can raise the risk of thyroid and bone cancers and leukemia. Children in fetuses are especially vulnerable – Reuters