Thousands in Beirut call for Hezbollah to disarm 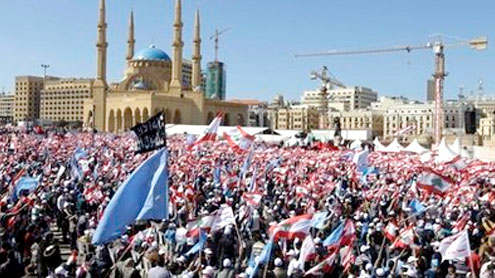 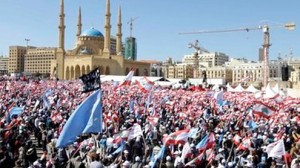 BEIRUT: Tens of thousands of supporters of Lebanon’s pro-Western opposition thronged downtown Beirut on Sunday, demanding that the Iranian-backed  group Hezbollah give up its weapons.The rally was a potent show of support for Lebanon’s toppled Prime Minister Saad Hariri, who moved into the opposition after Hezbollah and its allies forced his government to collapse in January.“We want to place the weapons at the disposal of the state because it is the state that unites us all and it is the army that protects us all,” Hariri said, shouting over the crowd as they cheered and waved Lebanon’s national flag.Hariri has taken a far stronger public stance against Hezbollah in recent weeks than he did during his 14 months as prime minister, suggesting that the country’s political deadlock is far from over.

Ghaleb Abu Zeinab, a member of Hezbollah’s political bureau, said the group will not respond to Sunday’s gathering.But a slew of billboards has popped up in Beirut lately, saying “Israel also wants Hezbollah disarmed” — a clear message that Hezbollah sees its weapons as a necessary safeguard against its enemies.Hariri accuses the militant group, which is backed by Syria and Iran, of using its weapons for intimidation and political leverage.Sunday’s rally heightens growing tensions in Lebanon over a UN tribunal investigating the 2005 assassination of Hariri’s father, former prime minister Rafik Hariri.The Hague-based court is widely expected to accuse Hezbollah members of involvement in the killing in indictments issued two months ago but which remain sealed.Hezbollah vehemently denies having anything to do with the killing, and its ministers walked out of Saad Hariri’s government when he refused to cut ties with the tribunal.Hezbollah and its allies then secured enough support in parliament to name Najib Mikati as their pick for prime minister. Mikati has emphasized that he will not do the bidding of any one side in Lebanon’s fractious politics, but he is still struggling to form a Cabinet.

Opponents of Hezbollah — which the US considers a terrorist organization — say having an Iranian proxy at the helm of Lebanon’s government would lead to international isolation.Hezbollah’s weapons are a longstanding and contentious political issue in Lebanon.Hezbollah was the only Lebanese faction allowed to keep its weapons under the agreement that ended the 1975-1990 civil war, on the grounds that it needed arms to fight any potential threat from Israel.Today, the arsenal far outweighs that of the national army and public sentiment on the weapons is mixed. The Lebanese applaud Hezbollah’s ability to confront Israel, but many accuse the group of leading the country into violent conflict.

In 2006, many Lebanese complained that Hezbollah had dragged the whole country into war with Israel. Two years later, 80 people died in clashes as Hezbollah resisted government attempts to dismantle its private phone network.Sunday’s rally also paid tribute to Rafik Hariri, whose assassination changed the course of Lebanese history by sparking a massive protest movement in 2005 that that became known as the “Cedar Revolution.” The movement ushered in the end of Syria’s 30-year military domination if Lebanon.The five-time prime minister had close ties with Western leaders as well as Syria and was credited with helping rebuild Lebanon’s capital after the civil war. In the last few months before his assassination, however, he had tried to limit Damascus’ influence over Lebanon, and many accused Syria of involvement in his killing – Arabnews