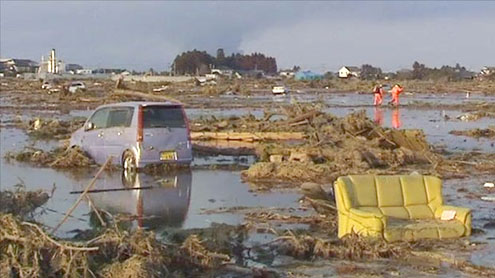 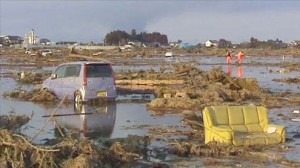 A second explosion has hit the nuclear plant in Japan that was damaged in Friday’s earthquake, but officials said it had resisted the blast.TV footage showed smoke rising from Fukushima plant’s reactor 3, a day after an explosion hit reactor 1.Japan’s nuclear safety agency said the blast was believed to have been caused by the build-up of hydrogen.Government officials said the reactor core was still intact as they tried allay fears of a radioactive leak.Technicians have been battling to cool three reactors at the Fukushima 1 plant since Friday, when the quake and tsunami combined to knock out the cooling system.The natural disaster killed hundreds and left thousands missing, sparking a huge rescue operation.The BBC’s Rachel Harvey in the port town of Minami Sanriku describes it as a scene of utter devastation, with the landscape strewn with debris.She says everything has been flattened until about 2km inland, and says it looks unlikely that many survivors will be found.Japanese police have so far confirmed 1,597 deaths, but the final toll is expected to be much higher.Kyodo news agency reported that 2,000 bodies had been found on the shores of Miyagi prefecture on Monday, but the claims could not be verified.Tens of thousands of people have been evacuated from the area around Fukushima nuclear plant.At least 22 people are now said to be being treated for the effects of exposure to radiation.

Government spokesman Yukio Edano said there was a low possibility of radioactive contamination from the latest explosion at the plant.He said the reactor’s containment vessel had resisted the explosion.The operators of the Fukushima plant said seven people were missing and three were injured by the blast.Experts say a disaster on the scale of Chernobyl in the 1980s is highly unlikely because the reactors are built to a much higher standard and have much more rigorous safety measures.Powerful aftershocksEarlier, Prime Minister Naoto Kan said the situation at the nuclear plan was alarming, and the earthquake had thrown Japan into “the most severe crisis since World War II”.He announced that the country would have to endure rolling power cuts from Monday.But later, the government announced that the planned blackouts had been postponed, saying they may not be needed if people can conserve energy.

The government advised people not to go to work or school on Monday because the transport network could not deal with demand.The capital is also still experiencing regular aftershocks, amid warnings that another powerful earthquake is likely to strike very soon.Meanwhile, tens of thousands of relief workers, soldiers and police have been deployed to the disaster area.Rescue workers have found scenes of total devastation in isolated coastal towns north-east of the main port city of Sendai, which was itself partially destroyed by the waves.Preliminary estimates put repair costs from the earthquake and tsunami in the tens of billions of dollars, a huge blow for the Japanese economy that – while the world’s third largest – has been ailing for two decades.The government announced it was pumping 15 trillion yen ($182bn; £113bn) into the economy to prop up the markets – which slumped on opening – BBC