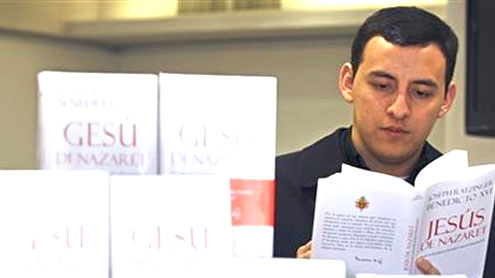 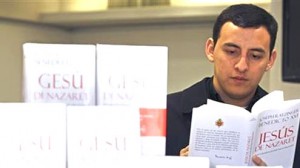 Pope Benedict has condemned violence committed in God’s name and personally exonerated Jews of responsibility for Jesus’ death in his latest book, released on Thursday.The book, the second in a planned three-part series on the life of Jesus, is a detailed, highly theological and academic recounting of the last week in Jesus’ life.Publishers have printed 1.2 million copies of the book in seven language. A blaze of international publicity included teleconferences with the media in several countries.The 350-page work, which reads more like a seminary text than something for the masses, is rife with citations from scripture and references to other theologians, historians and Roman Catholic writers.In one section, Benedict writes that there can be no justification for violence carried out in God’s name, an assertion as applicable to Islamist militancy today as to violence that the Catholic Church itself committed in the past as it spread the faith.“The cruel consequences of religiously motivated violence are only too evident to us all,” the pope writes. “Violence does not build up the Kingdom of God, the kingdom of humanity.”The part of the book that may have the most far-reaching effect on Catholic relations with other religions is one in which the pontiff details the events of Christ’s trial before Roman governor Pontius Pilate, and his sentencing to death.In that section, he repudiates the concept of collective guilt of the Jews at the time and of their progeny for Jesus’ death, a charge that has haunted Christian-Jewish relations for centuries.It was the first time a pope had made such a detailed dissection and close comparison of various New Testament accounts and concluded that there was no basis to the charge, first officially repudiated in a Church document in 1965.

Never before in the history of the church has there been a reigning pope who has written a full-length book on the life of Jesus,” said Brant Pitre, professor of Sacred Scripture at Notre Dame Seminary in New Orleans.Benedict says that it was the “Temple aristocracy” — and not all Jews of the time — who wanted Jesus condemned to death because he had declared himself king of the Jews and they believed he had violated Jewish religious law.Jewish leaders around the world have already hailed that section of the book.”Your Holiness, I commend you for forcefully rejecting in your recent book a false charge that has been the foundation for the hatred of the Jewish people for many centuries,” Israeli Prime Minister Benjamin Netanyahu told the pope in a letter.”My fervent hope is that your clarity and courage will strengthen the relations between Jews and Christians throughout the world and help promote peace and reconciliation for generations to come – Reuters

Pasha gets another year in office