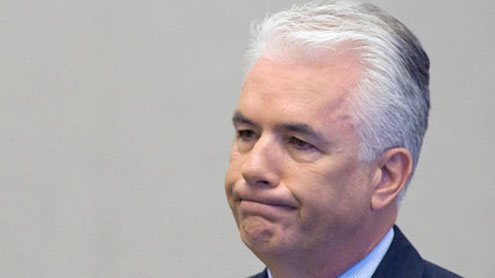 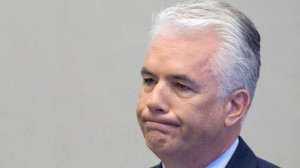 LAS VEGAS: The Nevada man whose wife had a monthslong affair with Sen. John Ensign said in a rare statement Wednesday that the Republican should immediately resign to shield the family from an ongoing ethics investigation stemming from the extramarital relationship.Doug Hampton, Ensign’s former co-chief of staff, said Ensign’s “callousness and lack of remorse” has prolonged the anguish caused by the 2008 affair.Ensign announced on Monday that he wouldn’t pursue a third term to protect his wife and children from “exceptionally ugly” campaign attacks. The Senate Ethics Committee is investigating whether Ensign tried to hide the affair by securing Hampton a lobbying job.Hampton said he, his wife and others close to them are being forced to cooperate with the investigation, a process that continues to reopen old wounds.”His selfish, steadfast refusal to resign immediately prolongs the pain and anguish he caused,” Hampton said. “It also requires us to continue to cooperate with the Senate Ethics investigation, including disrupting our lives by requiring myself, Cindy and others close to us to return to Washington D.C. to be deposed.”Hampton dismissed the ethical questions driving the investigation. Ensign’s parents provided the Hampton family with $96,000 described as a gift and federal criminal law prohibits congressional aides from lobbying their ex-bosses or office colleagues for one year after departing their Hill jobs.”The cost to the taxpayers of this fruitless exercise flies in the face of John’s claim of being fiscally conservative and a protector of the taxpayer’s money, much like his affair with my wife flew in the face of his claim to moral righteousness,” Hampton said.Daniel Albregts, a Las Vegas lawyer representing the Hamptons, told The Associated Press that Doug and Cindy Hampton have both been subpoenaed and could return to Washington soon.It’s imminent,” he said.Albregts declined to name the others who have been questioned or discuss investigators’ questions.

The Justice Department and the Federal Election Commission also investigated the scandal, then dropped the cases with little explanation. The Senate ethics panel, however, recently named a special counsel to look into the matter.Ensign’s spokeswoman did not immediately return a request for comment.Albregts said the Hamptons recently relocated to California to start a new life together, but Ensign’s continued presence in Washington — a constant reminder of the affair — has prolonged their healing process.”They lost everything,” Albregts said. “They are trying to rebuild their lives.”Ensign acknowledged the relationship with Cindy Hampton in June 2009. The Ensigns and the Hamptons had been close friends and Cindy Hampton also worked for Ensign in Washington.The affair and the legal problems that followed ended talk that Ensign might make a run for the Republican presidential nomination in 2012 and forced him to resign his position as chairman of the Senate Republican Policy Committee.Through it all, Ensign insisted he would seek re-election until his announcement on Monday, when he reiterated that he had not violated any laws or ethics rules. He also said the investigation did not influence his decision to retire from politics after 2012.”If I was concerned about that I would have resigned, because that would make the most sense because then it goes away,” Ensign said – Yahonews