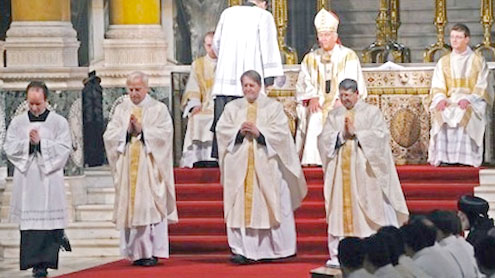 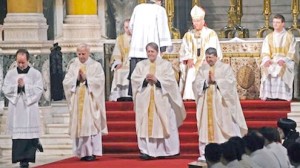 LONDON: Hundreds of disaffected Anglicans left the Church of England to become Roman Catholics on Ash Wednesday, the Christian day of penance.The day set by the church to welcome converts wishing to join the Ordinariate of Our Lady of Walsingham, a unique grouping created by Pope Benedict XVI for Anglicans left feeling isolated since the Church of England decided in 1992 to ordain women as priests.Tensions have grown further as the governing General Synod moves to allow women to become bishops while denying special structures to protect the sensitivities of the objectors.”I believe that synod is trying to make the church conform to the culture rather than being faithful to new life found in Jesus Christ,” the Rev. David Lashbrooke said in his farewell sermon at St. Marychurch in Torquay, southwestern England.Those joining the ordinariate will be allowed to keep some of their customs and liturgy, though they won’t be allowed to receive communion until they are confirmed shortly before Easter. Their priests can be ordained to the Catholic priesthood even if they are married.

Church officials haven’t released numbers, but a Catholic magazine, The Tablet, has reported that about 20 priests and 600 lay people around England are making the move. Five former bishops have already gone over.”Of more than 22,000 ordained Church of England clergy in total, about two dozen would appear to have decided to join the ordinariate at this time,” said Howard Dobson, spokesman for the Archbishops’ Council.”It is impossible to obtain an accurate figure of lay numbers as no one needs to register their leaving the C of E,” Dobson said. The church claims 1.7 million active members.In the Catholic diocese of Brentwood, covering east London and suburban Essex County, 241 adults and children, including seven priests, have indicated they will be moving from the Church of England, said diocesan press officer Mary Huntington.The program set by the Catholic Church for the ordinariate is built around the season of Lent leading up to Easter, when new members normally prepare for confirmation, and Pentecost 50 days after Easter when former Anglican priests will be ordained into their new church.

The Rev. Simon Chinery, a curate or assistant priest at two Anglican churches in Plymouth, said he felt “a sense of peace, a sense of excitement and some nervousness” as he prepared for the Ash Wednesday service at a Catholic church.In his farewell to his old churches on Sunday, Chinery noted he wasn’t the first priest from the parish to become a Catholic but that Benedict had made it easier.”Whereas previously ex-Anglicans were stealthily admitted to the Catholic church through a side entrance, this time the front door has been thrown open and the welcome mat laid out,” he said.”I deeply love the Church of England, it’s a hard decision to leave it behind,” he said Wednesday, adding that he would particularly miss the church’s rich musical heritage.The Rev. Ed Tomlinson was leaving St. Barnabas Church in Tunbridge Wells, southeast England, and felt relief as he took about 70 parishioners with him into the Catholic Church.”I spent so many years battling to defend the faith from within the Church of England, which is crazy, and that’s taken all my energy away from visiting the sick, preaching the good news and helping people,” Tomlinson said in an interview with British Broadcasting Corp. radio.A smaller group remains committed to St. Barnabas and the Church of England, Tomlinson added, “and they have my prayers and good wishes.”While some move, others are still weighing their options.Rev. John Corbyn of St. Mary Magdalene Church in Harlow, 25 miles (40 kms) northeast of London, said his group may be part of a second wave to migrants.”It’s not just one day and that’s it,” Corbyn said. “It’s not a closing down sale – Yahoonews