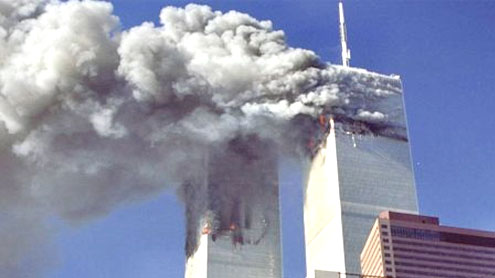 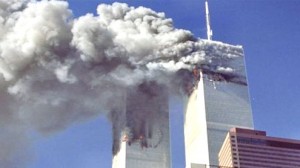 New video has emerged of the 11 September 2001 attacks on New York’s World Trade Center, shot by a police helicopter crew hoping in vain to rescue trapped office workers.The video shows the aircraft hovering near the towers’ roofs, only to retreat as the first tower fell.”The whole tower, it’s gone,” an officer is heard yelling. “They knocked the whole fricking thing down.”It was released by a US government agency that investigated the collapse.The airspace over the towers was closed to news helicopters on the morning of the attacks, so little video of the attacks from the air has emerged.The National Institute of Standards and Technology obtained the video from the New York Police Department during its investigation into the structural collapse of the Twin Towers.It was released by the NIST in response to a Freedom of Information Act request, but it was not clear who published it online.More than 2,800 people were killed when hijackers crashed jets into the buildings.The same morning, more were killed when hijackers crashed a jet into the Pentagon just outside Washington DC, and in Shanksville, Pennsylvania, where hijackers flew a jet into the ground as passengers fought their way into the aircraft cabin in a bid to retake the plane – BBC