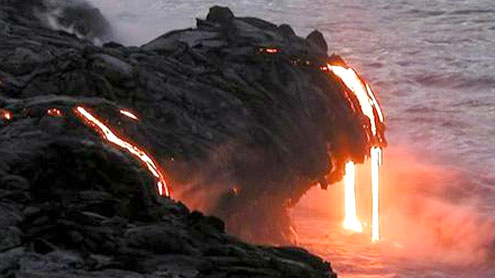 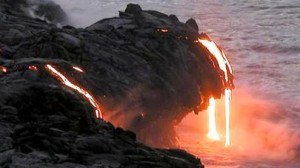 HONOLULU: Scientists were closely monitoring heightened activity at Kilauea Volcano on the Big Island of Hawaii, after a fissure sent lava spewing 65 feet in the air.No homes were threatened and no campers were injured, said park rangers, who cautioned visitors to still keep their distance from the volcano.Kilauea has been in constant eruption for 28 years. But geologist Janet Babb of the U.S. Geological Survey said this weekend’s activity indicates “new episodes in eruptions and further unknowns.”Saturday, one of the volcano’s crater floors, which is named Pu’u ‘O’o, collapsed 370 feet, the Geological Survey said. The event was accompanied by 150 small earthquakes, which were all confined to the volcanic area.Separately, on the volcano’s eastern side, a 535 yard-long fissure in the ground opened, spewing lava 65 feet in the air, the Geological Survey said. Also, another crater called Napau began erupting.Authorities closed a trail on the east rift zone, the campsite at Napau Crater and nearby roads, said Hawaiian Volcano Observatory Park Ranger Mardie Lane.Visitors can see the eruptions from about 1.5 miles away and still remain safe, she said – Reuters