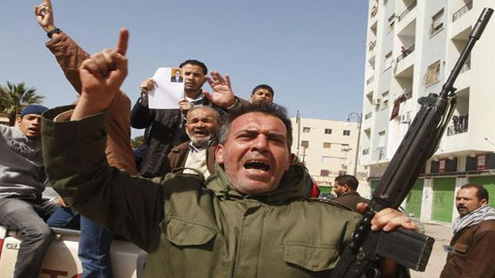 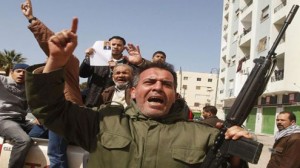 RAS LANOUF, Libya – Libyan rebels have captured the oil port town of Ras Lanouf from pro-Moammar Gadhafi forces, their first military victory in what could be a long, westward march from the opposition-held east of the country to the capital Tripoli.Witnesses said on Saturday that Ras Lanouf, about 87 miles (140 kilometers) east of the Gadhafi stronghold of Sirte, fell to rebel hands on Friday night after a fierce battle with pro-regime forces who later fled.An Associated Press reporter who arrived in Ras Lanouf late Saturday morning saw Libya’s red, black and green pre-Gadhafi monarchy flag adopted by the rebels hoisted over the town’s oil facilities.The witnesses spoke on condition of anonymity because they feared reprisals.THIS IS A BREAKING NEWS UPDATE. Check back soon for further information. AP’s earlier story is below.

TRIPOLI, Libya (AP) — Moammar Gadhafi’s forces on Saturday broke through rebel lines at an opposition-held city that is closest to Tripoli, in a dawn attack that could prove crucial to the regime’s defense of the Libyan capital, witnesses said.They said the forces loyal to the country’s longtime leader were inside Zawiya, 30 miles (50 kilometers) west of Tripoli, after overcoming rebel positions with heavy mortar shelling and machinegun fire. They said the shelling damaged government buildings and homes.The hours-long attack started at dawn and the rattle of gunfire and explosions could be heard as the witnesses spoke to The Associated Press by phone. They spoke on condition of anonymity, fearing for their own safety.They said several fires were raging in Zawiya on Saturday and that heavy black smoke hung over many parts of the city of some 200,000 people. They said snipers were shooting on sight anyone on the streets or residents who venture out on their homes’ balconies.The city’s rebels, they said, had retreated to take new positions deeper inside the city.”We will fight them on the streets and will never give up so long as Gadhafi is still in power,” said one of the rebel fighters, who also spoke on condition of anonymity for fear of reprisals – AP