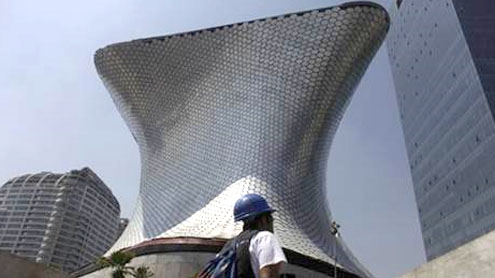 MEXICO CITY: The world’s richest man, telecom tycoon Carlos Slim, gave a sneak peak Tuesday at the new museum where he plans to show his vast collection of art and collectibles, including priceless pieces by Mexican muralist Diego Rivera, French sculptor Auguste Rodin and Italian master Leonardo da Vinci.The Soumaya museum — named after the tycoon’s late wife — opens to the public on March 29 and admission will be free.The museum “will be important for the Mexican people … it will be a place for them to enrich themselves with international history, with art history, with the history of Mexico,” Slim said at a ribbon-cutting ceremony attended by President Felipe Calderon, Colombian author Gabriel Garcia Marquez, and U.S. television host Larry King. Hundreds of guests packed the Soumaya late Tuesday.Slim led a small group of special guests through the museum, which will display a rotating selection of his 66,000 artworks, including pieces by Mexican artists Rivera and Rufino Tamayo, as well as European masters.“There are few, very few spaces where Mexicans can learn about the great masters of all time,” Calderon said. “With this museum, Mexico is at the forefront when it comes to world art and architecture.”Slim’s fortune was estimated at $53.5 billion by Forbes magazine last year, topping Microsoft founder Bill Gates and investor Warren Buffett. He is said to especially admire Rodin, and his collection of the French sculptor’s work is one of the largest outside France.Designed by Slim’s architect son-in-law, Fernando Romero, the six-story, anvil-shaped building cuts a dramatic arc through the skyline of the capital’s upscale Polanco district. Some 16,000 aluminum panels make up the museum’s bending exterior, reflecting sunlight onto broad stairs leading to the entrance.Inside, the Soumaya features 183,000 square feet (17,000 square meters) of exhibition space encompassing six halls.One hall will house Slim’s collection of coins, bills, gold and silver, for the first time on display to the public. The others will showcase his collection of portraits, fashion and furniture; works by European masters such as da Vinci and El Greco; as well as 19th- and 20th-century paintings by Monet, Cezanne, Toulouse Lautrec and Van Gogh.

It replaces a smaller museum also named Soumaya in southern Mexico City.Slim, 71, is the son of a Lebanese-born merchant whose conglomerate of retail, telecom, manufacturing and construction companies dominates Mexico’s commercial landscape.So vast is his empire that it is common for Mexicans to find themselves talking over a Slim-operated cell phone at a Slim-owned shopping center while waiting to pay a bill to a Slim-owned company at a Slim-owned bank. If the line is too long, they can catch a quick coffee at a Slim-owned restaurant.His Telmex telephone company controls 83 percent of land lines in Mexico and is the leading Internet service provider. Another of his firms is the top cell phone operator. He also controls the Sears and Saks retail operations in Mexico.In 2009, he announced a $250 million investment in The New York Times – Yahoonews