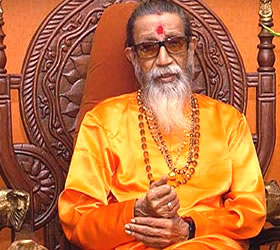 Shiv Sena chief Bal Thackeray launched a severe attack against Congress general secretary Rahul Gandhi for his alleged comments that Hindu terrorists were more dangerous than the Lashkar-e-Toiba (LeT). In an editorial in his mouthpiece Saamna, published on Sunday, Thackeray warned that Rahul would have to pay dearly for his alleged comments stating that the Hindu majority in the country would retaliate very strongly. “The Italian connection of Rahul is well known and his maternal grandfather was an admirer and close friend of Mussolini. Rahul’s family, right from his parental great grandfather Jawaharlal Nehru, worshipped those who divided the country,” Thackeray said when asked about Rahul’s credentials. In a turn around from his earlier anti-China stand, Thackeray lavished praised on the Chinese and stated that India should befriend China which could turn out to be a better friend than the United States, which he alleged was not keen to curb terrorism outside it border. “Make no mistake that China is our next door neighbor and also a powerful country that is capable of challenging the US. Agreed that our experience with China is not good since the 1962 war, but it is a fact that we lack the courage to wage a war against China and recover the land under its possession, but we can regain the land by maintaining good relations with China,” Thackeray wrote in the editorial.

Emulating his uncle Bal Thackeray, the estranged nephew and Maharashtra Navnirman Sena (MNS) chief Raj Thackeray too launched a tirade against Rahul.  Speaking at a public function in Dombivili suburb of Mumbai on Sunday morning, Raj described the Congress leader as a “mentally unsound” person and asked whether Rahul had ever studied and known what terrorism is? Does he know what is LeT? “Rahul does not have the courage to speak before four people but he goes and makes the comments about Hindu terrorism before the US Ambassador. However, we do not know for sure whether Rahul had truly spoken or not about Hindu terrorism,” he added while taking potshots at the media. He said, “Should we believe and trust what is published in the media? Also we wonder whether the media understand the news itself.” – Arabnews