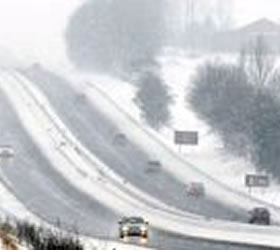 Thousands of angry travellers struggled Monday to get home for Christmas as snow and ice caused fresh chaos at European airports and paralysed roads and railways across the frozen continent.International hubs London, Paris, Frankfurt, Amsterdam and Brussels tried to clear a backlog of passengers forced to sleep on terminal floors for up to three days as they sought to reach their destinations by the end of the week.Authorities in Frankfurt even sent in clowns in a bid to cheer up travellers, but fury mounted.in Britain, especially at Heathrow where severe disruption reigned despite the last major snowfall having been on Saturday.”I am ashamed to be British,” Marian Perkins, 65, who was hoping to fly to Australia to see her new grandson for the first time, told AFP.”It’s disgusting. We are here in the cold with the same clothes since Friday, because we don’t carry winter clothes when we go to Australia,” she said.Heathrow’s Terminal 3 had been turned into a makeshift camp with exhausted passengers crashed out on temporary mattresses as money and patience wore thin at the world’s busiest international airport.

The airport warned travellers to anticipate chaos “potentially beyond Christmas Day”. It cut flights to a third until 0600 GMT Wednesday in a bid to get diverted jets and crew back to their normal positions.American musician Giovanni Bet, 22, who was trying to get back to Chicago after a tour, said: “We were here last night. It was like a shanty camp with people sleeping on the floor.”London Mayor Boris Johnson urged airport authorities to act swiftly.”It can’t be beyond the wit of man surely to find the shovels, the diggers, the snow-ploughs or whatever it takes to clear the snow out from under the planes, to get the planes moving and to have more than one runway going,” he told the BBC.But British airport operator BAA defended its handling of the crisis, with chief executive Colin Matthews saying Heathrow had to bring in earthmoving equipment and 50 trucks to remove the snow.”I cannot remember in my lifetime any episode of cold and snow remotely like today,” he said.The government lifted night-flight restrictions until Christmas Eve and special repatriation flights were being arranged.Eurostar, which operates high-speed passenger trains linking London with Paris and Brussels, also faced chaos.

Five-hour queues stretched around the block in freezing weather from London’s St Pancras station as Eurostar cancelled some services and operated speed restrictions on trains that did run, nearly doubling some journey times.”We started queuing yesterday, we were here until seven o’clock and then… we took a hotel and now we have been waiting for an hour already today,” Anne-Sophie Prevost, a 24-year-old bank worker from France, told AFP.A brass band played at the station in an attempt to provide some Christmas spirit inside the imposing Gothic station.Temperatures reached a record low in Northern Ireland, hitting minus 17.6 degrees Celsius (0.3 degrees Fahrenheit).In Belgium, Brussels airport grounded all departures until Wednesday due to lack of de-icing liquid.There were fresh snowfalls in France, hitting both Paris international airports, Charles de Gaulle and Orly, where three out of 10 flights were cancelled Monday.”Air traffic at all airports in the Paris region is very disrupted,” the civil aviation authority said.At Charles de Gaulle, 3,000 people were forced to spend Sunday night in the terminals after 40 percent of flights were scrapped.

Authorities banned heavy trucks from the roads around Paris and many buses were cancelled in the region, the RATP Paris transport network said.French railway operator SNCF handed out 12,000 ready meals and booked 500 hotel rooms in Paris for stranded passengers but said services were expected to be mostly back to normal for Christmas.Frankfurt airport, Germany’s busiest, resorted to clowns to keep stranded children entertained — after the police were sent in, according to press reports, to calm some angry passengers.The airport scrapped around 340 flights Monday — mainly because others airports around Europe were closed — after more than a thousand travellers spent the night on camp beds.There was also disruption at Amsterdam-Schiphol airport Monday.In Italy, the bodies of two homeless people were found Monday, likely victims of the cold – France24

Turkey to design, produce its own fighter jet

Turkey to design, produce its own fighter jet